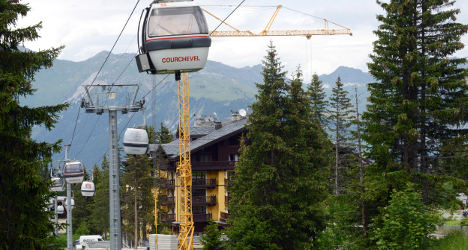 Courcheval in the French Alps,which could really do with some snow right now. Photo: AFP

France, Austria and Switzerland, home to some of the most coveted ski slopes in Europe, have experienced unseasonably warm temperatures that have prevented the skiing season from getting into full swing.

"Of course it is worrying, if temperatures could drop by five degrees (Celsius) that would be great," said Michel Giraudy, the president of French Mountains.

The association which promotes mountain tourism counts only 40 of some 200 skiing stations open across France.

Laurent Reyanud from the organisation DSF, which represents the French skiing industry,the main problem is below 2,000 metres where there is still not enough snow.

"it's not a good start, but the ski season is quite long. Last year the snow came late as well," he said.

"We just don't know what the sky will bring us, but in the high ski resorts there is no problem."

British ski instructor in the Alps Simon Palmer told The Local that people were cancelling skiing holidays over the lack of snow.

"The start of the season is always quite dodgy as you never know whether your going to get enough snow, but this one seems particularly so," he said.

"People do seem to be depressed as it's impacting on businesses."

"Snow cover remains feeble, autumn has been mild. Overall the start to the season has been rather late," said meteorologist Cecile Coleou.

The southern Alps have been slightly luckier than the north, and Italy has reported relatively good levels of snow at the start of the season.

But for the rest of the countries spanning the mountain range, ski resorts fear they may be left out in the cold over the festive period.

Many ski resorts in Austria have been unable to open due to too little or not enough snow, and temperatures are too mild to use snow-making machines, which still require an adequate level of natural snowfall.

Stefan Strolz, mayor of the of the Alpine village of Warth in Vorarlberg, said that one more week's delay in the start to the season was "bearable" but that any longer would cause "serious economic pain".

In the western state of Tyrol, Austria's biggest skiing region, only around 30 out of 80 ski resorts were open, and those that were had only a few ski lifts in operation.

Florian Neuner, spokesman for the Tyrol tourist board, remained positive about the season as forecasters predict colder weather next week.

"In some cases the number of reservations for the Christmas and New Year period is actually better than last year," he said. "Hoteliers are mostly still relatively relaxed and are not worried."

Verbier, one of the world's top ski resorts located in Switzerland, has only opened about half of its pistes and is still relying heavily on snow cannon.

Many ski resorts in the country are offering discounts on slope prices as a result.

However the situation was better at high-altitude stations like Davos, Zermatt or St-Moritz.

While snow is not a problem for Italy, which has escaped the mild winter temperatures seen in other skiing hotspots, it is the recession which is more likely to keep families away over Christmas and the crucial New Year holiday period.

Despite the dearth of snow in France hopes remained high for a white Christmas.

Stations in the French Pyrenees "should all be able to open this week, at least at 50 percent capacity" said an upbeat Laurent Reynaud, director of France's professional ski operators association.

"Sure we are running a bit late but we hope it will snow for Christmas," he told AFP. "We are like snow farmers, we do what we can with what the sky gives us."