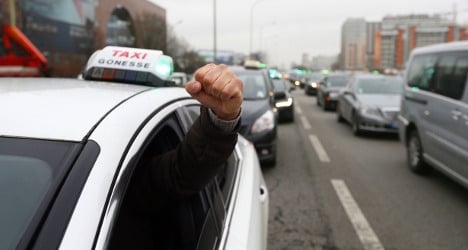 Do taxi drivers deserve our sympathy over the UberPOP sharing service? Photo: AFP

Dozens of Paris taxi drivers gathered in the capital on Monday, to protest once again against the American competitor Uber and more specifically its new UberPOP car-sharing service.

After starting at dawn by gathering at Paris's main airports, Orly and Roissy Charles de Gaulle, before heading slowly in the direction of the capital, the demonstration ended up at Place Vauban, in the seventh arrondissement, where dozens of taxi drivers parked up and made their feelings known.

The protest took place after a French court on Friday decided new restrictions on the UberPOP service, which hooks up drivers and passengers through a smartphone app, would not be enforced.

With taxi drivers causing travel chaos once again in a protest against a system that many users see as a cheaper alternative to traditional cabs, do Parisians have much sympathy for cabbies?

When asked, many members of the public pointed to the fact that UberPOP cars are more affordable and of superior quality and that the car-sharing service should be allowed to exist.

“UberPOP is better when it comes to price and quality,” Mathieu, a 17-year-old high-school senior told The Local.

Charline, aged 17, added: “Sometimes it is safer to take an Uber taxi rather than a regular taxi."

Béatrice, a 50-year-old public service executive said: “Taxi prices are sometimes too expensive and drivers are not very conciliatory. Also, I prefer car-sharing for all of my journeys since the price to quality ratio is much better.”

Ivai from Spain said he understood taxi drivers concerns but said Uber should be allowed to exist.

“It is difficult to draw a line because we have the right to be able to share our car with anyone and drive someone to a location,” he said.

The company is already been battling lawsuits in various European countries such as Denmark and Norway.

@TheLocalFrance They cry 'unfair competition'! But in Nice, Uber are taking on the taxis who over-charge and constantly cheat customers!

But not everyone agreed that Uber was the solution to the age-old problem of finding a taxi in the capital.

Stuart Bogue said: “Good for them [taxi drivers]. Glad to see them stand up for themselves. Uber is merely a shell game racket that skirts regulations and insurance laws and attempts to drive the competition out of town by price dumping till the others quit…then what?”

For its part Uber argues that banning its service would violate the practice of free enterprise and the principle of equality.

But that’s exactly what the government aims to do, with a spokesman for the Ministry of the Interior confirming on Monday that the service will indeed be banned from January 1st.

That decision was naturally welcomed by the Paris taxi drivers The Local spoke to on Monday.

“It is really good news,” said Nenad, a taxi driver protesting against the ride-sharing service at Place Vauban today.

“UberPOP is a clandestine taxi service. It is a good thing that the government decides to ban it. What they do is really unfair. I have lost many customers as well as my colleagues.”

“We have to take an exam, have an MOT (annual vehicle test), we cannot have a criminal record, our price is fixed by the prefecture and even after all that, we have charges to pay,” said Pascal Brosse, taxi driver established in Morangis since 1994.

“If anyone starts working as an occasional taxi driver, it is nothing but illegal. If there is no regulation, it will turn to chaos.”