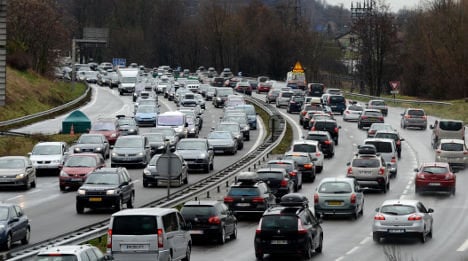 This could be the scene on roads around Paris on Monday with taxi drivers planning a protest against Uber. Photo: AFP

Dozens of taxi drivers held a go-slow in Paris on Monday in their latest protest against competition from the Uber taxi app.

Drivers gathered at dawn near the main airports at Roissy and Orly and headed slowly towards the city, horns blaring, hoping to force traffic to a snail's pace — known as an "operation escargot" in French, after the word snail.

However, with France's leading taxi unions staying out of the protest, there was only minimal disruption on the roads, police said.

"We are up against unfair competition. We are dealing with [Uber] who pay virtually no charges, they don't pay taxes. We don't get any of these favours," one protesting driver told Le Parisien newspaper on Monday.

"We know that it will cause havoc, but we have no choice, we are not being heard," said Michael Mouly, a taxi driver who was protesting to "defend his steak" at Charles de Gaulle airport on Monday.

"Private hire taxis are unfair competition, we do not fight on equal terms," he said.

A commercial court in Paris ruled on Friday that a new law making it harder for Uber drivers to solicit business could not be enforced until the government had published full details of the restrictions.

@TheLocalFrance They cry 'unfair competition'! But in Nice, Uber are taking on the taxis who over-charge and constantly cheat customers!

"It's the straw that breaks the camel's back," said Ibrahima Sylla, president of France Taxis, whose organisation has joined several others in calling for the early morning protest on Monday.

They have urged taxi drivers to gather at the northern Roissy Charles de Gaulle airport and the southern Orly airport at 05:00 am before slowly converging on the city in a bid to block arterial highways.

"This is a fight against Uber. We're fed up. Allowing UberPOP means leaving 57,000 French taxis high and dry, and thus 57,000 families. And that is out of the question," said Sylla.

The Federation of Independent Parisian Taxis for their part wrote on Facebook: "It is about saying no to injustice, no to illegal work."

However on Morning France's Ministry of Interior confirmed that the UberPOP service would be banned from January 1st, despite the court's ruling on Friday.

"The law will come into force on 1 January and will be punishable by up to two years in prison and a €300,000 fine for anyone who organizes a scheme that pairs up clients with people who are neither taxi drivers nor private hire cab drivers," said Pierre-Henry Brandet, spokesman for the Interior Ministry.

San Francisco-based Uber is giving the US and European taxi industries a run for their money by hooking up drivers and passengers through a cellphone application.

However it is battling lawsuits in a string of countries for unfair competition and rising anger over drivers who are not properly vetted and beholden to no one.

New Delhi last week banned Uber from operating in the Indian capital after a passenger accused one of its drivers of rape.

Thailand, the Netherlands and Spain have ruled it illegal and Denmark and Norway have filed complaints against the company. Brussels also announced Friday it plans to file a complaint.

The company argued in France that banning its service violates the practice of free enterprise and the principle of equality.