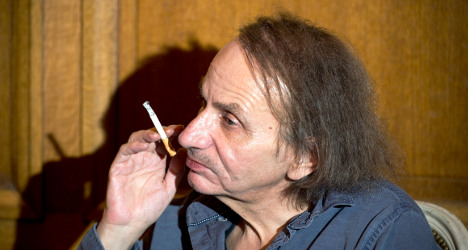 The year is 2022 and President François Hollande is in the final stretch of his second and last stint in power. The top two parties vying to take over from him are the far-right Front National and the Muslim Fraternity.

The Muslim party wins the presidential election by allying itself with the Socialists and the centrists, and its leader Mohammed Ben Abbes names as prime minister François Bayrou (who in reality is currently the leader of the centrist MoDem party).

France is in turmoil.

This scenario is the plot of the new novel due out next month by Michel Houellebecq, one of France’s top literary exports, according to Les Inrocks magazine. No-one at the publisher, Flammarion, was immediately available to confirm the report when contacted by The Local.

The novel is narrated by François, a typical Houellebecq character. He is 44, a university literature teacher who occasionally frequents prostitutes and suffers from erectile dysfunction in encounters with women of his own age.

He is frustrated and unhappy, and, according to Les Inrocks, is toying with the idea of converting to Islam. Whether he does or not will be revealed on January 7, the date of the publication of the sixth novel by the 58-year-old writer.

The title, Soumission, is a clear allusion to the word Islam, which in Arabic means submission to the will of God.

In 2002 a French court acquitted Houellebecq of charges of inciting racism by calling Islam "the stupidest religion".

The writer told the court that he had never despised Muslims but felt contempt for their religion, adding that he believed Christianity, Judaism and Islam were all based on scriptures that were "texts of hate".

His new novel, as might be expected given the subject, has already caused a stir throughout Franc's Twittersphere.

"Houellebecq has invented a new concept: the literature of the troll. But how do we obey the adage: 'Don't feed the troll'?" tweeted Laurent Nunez.

And another tweeter named Faïza Zeroula, said with a heavy hint of sarcasm: "Houellebecq's novel will allow us to debate a new subject: Muslims in France. Great, I can't wait."

Soumission will be his first novel since 2010, when he published "La Carte et le Territoire" (The Map and the Territory), which features the "celebrated novelist Michel Houellebecq" as a main character, and which scooped France's top literary award, the Prix Goncourt.

His first novel, Whatever, was published in English translation in 1994. Atomised followed in 1998, and Platform in 2001.

Houellebecq was most recently seen in France on cinema screens clad in cycling shorts and soliloquising about life, death, and despair, in a film called "Near Death Experience."