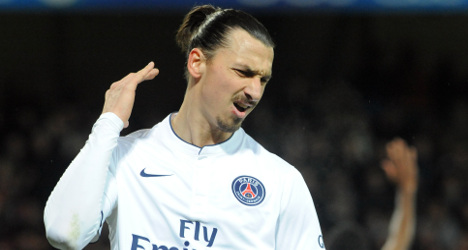 Star-studded Paris Saint Germain slumped to a second defeat in a week as they lost their unbeaten French Ligue 1 record when lowly Guingamp beat them 1-0 on Sunday.

But the shock reverse was softened when league leaders Marseille, on 38 points, also lost 1-0 at Monaco in Sunday's late game, leaving the champions second just a point adrift of the top and Lyon third on 36 points.

Victory would have made Marseille 'Champions of Autumn', league leaders going into the winter break, but Bernardo Silva's precise shot from the edge of the area on 68 minutes handed Monaco a deserved win.

Fresh from securing their passage into the last-16 of the Champions League as group winners on Tuesday, Monaco's disciplined display left the usually swashbuckling Marseille frustrated.

Rod Fanni missed a simple chance for the visitors with an open goal begging just before half-time, and Marseille's star striker Andre-Pierre Gignac was kept quiet.

PSG president Nasser Al-Khelaifi had been furious as his side lost 3-1 in Barcelona on Wednesday.

But Sunday's performance was far worse.

Jeremy Pied got Guingamp's goal with a flying header on the edge of the six-yard box in the 11th minute with the Paris central defence of Thiago Silva and David Luiz nowhere to be seen.

"It was poor marking all round, even me I got it wrong," said PSG midfielder Blaise Matuidi.

"We're really upset. We're just not used to losing and now that's two in a week."

Edinson Cavani had hit the crossbar in the second minute and Zlatan Ibrahimovic had the ball in the net in the 35th minute only to see an offside flag go up.

PSG had ten wins and seven draws going into the game and, despite dominating, Guingamp's bloody-minded resistance was eventually more than a match for the Qatari-backed PSG side.

"This is not just a bad week, it's a dreadful one," said PSG coach Laurent Blanc.

"If we lose because the other side were good that's one thing, but this we cannot tolerate."

Lille, dumped out of the Europa League in midweek, picked up three welcome points with a 3-0 win over Toulouse, thanks to goals from Djibril Sibide, Ryan Mendes and Nolan Roux.

Earlier, Saint Etienne coach Christophe Galtier was left with a bitter taste after a 0-0 stalemate with Nice saw his midfielder Ismael Diomande sent off for a second yellow after a clash with Nice's Carlos Eduardo, who was also given a straight red for his studs in the face challenge.

"He got kicked in the face, I can't explain it," said Galtier of the second yellow. "The guy from Nice deserved his red though."

On Saturday a freak own goal helped Nantes to a 2-1 win over Bordeaux to end a three-match losing run thanks to Jordan Veretout's opener, cancelled out
by Kian Hansen's own goal.

In the 66th minute Bordeaux's young Slovenian reserve keeper Azbe Jug haplessly scored the decider when the ball, rebounding off a post, struck him on the head and ended up in his own net.

Rennes were thwarted 2-0 at Bastia, playing much of the game a man down after Fallou Diagne's 26th minute red card.

A first half stoppage time goal from Ryad Boudebouz and Yannick Cahuzac's effort nine minutes from time earned Bastia a precious fourth win of the season.

Reims' Brazilian midfielder Rigonato scored either side of the break in Reims' pulsating defeat of Evian, while on a high-scoring day in the French top flight Lens came from behind to salvage a 3-3 draw at Montpellier.