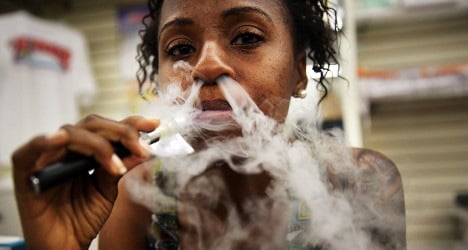 Three young Frenchmen are about to launch an electronic cigarette containing cannabis extracts which they say will give you the relaxing and pain-killing effect of the drug but without the high – and they claim it will be entirely legal.

“KanaVape brings you many of the benefits of cannabinoids without the psychotic effect of THC,” the psychoactive ingredient in marijuana, according to the website of the product due to go on sale this month.

“Vape pens” – the fashionable term for electronic cigarettes – which allow consumers to inhale cannabis vapour rather than combusted smoke, are increasingly popular in the United States, where many states have recently legalised the consumption of cannabis for medical or recreational purposes.

But they are rare in Europe, where the Netherlands is the only country to have legalised marijuana.

KanaVape hopes to tap into the potentially huge market.

“By using only hemp with 5% CBD (Cannabidiol) and no THC, KanaVape provides you a unique cannabinoids experience. Cannabidiol is a non-psychotic cannabinoid, it will not make you "high" but will help you relax,” the firm claims.

KanaVape says it will use the hemp varieties of the cannabis plant for its vape pens. Hemp is legally grown to make products such as oil, rope, cloth, paper, and fuel, and in recent years its producers have been touting its medical benefits.

Antonin Cohen, one of the founders of the firm, several years ago set up an association to bring the debate about the medical uses of cannabis to the French-speaking world.

He was working in the sector of US start-ups and then decided to give that up and launch Kanavape to try to “help people who are suffering”, he told Vice news website.

His associate Sébastien Béguerie is an agricultural engineer. Cohen said his colleagues spent two years working on extracting legal cannabinoids and making sure there would be no THC in their product.

He told Vice that the vape pen was aimed principally at people suffering from ailments that could be eased by cannabis.

“We cannot be accused of selling a product that has recreational use. You cannot get high with it,” he said.

But on the website there is no reference to the product being essentially for medical use. It is touted more as a fun product that “provides you a unique cannabinoids experience.”

The firm says its products are environmentally-friendly and come from farms in the Czech Republic, France and Spain that do not use chemicals or synthetic pesticides.

France recently announced a major crackdown on tobacco and e-cigarettes which included banning the devices from various public places.