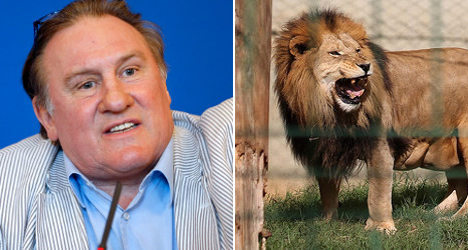 Gerard Depardieu has claimed he killed and ate two lions on a trip to Africa. Photo

The 65-year-old said he was forced to kill the big cats after the creatures had blocked a vehicle in which he was a passenger during a trip to Burkina Faso.

“We broke down on a track in the bush,” he told Britain’s The Independent newspaper .

“The two lions waited in front of us and wouldn’t move. Hours passed, and we couldn’t get out of the car, the African driver was very afraid. We had no choice; we had to shoot them,” he said.

The star of films such as Green Card, Cyrano de Bergerac and Asterix had previously talked about killing the animals but had not stated that he had subsequently consumed them.

When The Independent asked him if he had in fact eaten them, he replied: “Yes.”

Depardieu also discussed the incident when he was thrown off an Air France flight en route for Dublin in 2011 for urinating in a bottle while the plane prepared to take off.

“There was this air hostess who was a little depressed, and I urgently wanted a piss. We’d been delayed 45 minutes, there were seven planes in front of us, and the hostess blocked me with her foot, so I pissed in a bottle,” he said.

The actor has said that he starts drinking in the morning and consumes up to 14 bottles of wine a day.

He shocked an audience at a First World War commemoration in Brussels at the start of this month when he turned up drunk and shouted obscenities.

In September he published his autobiography, called “It happened like that” (Ca s’est fait comme ça), in which he recounts his difficult childhood and the death of his son Guillaume in 2008.

He established residency in a Belgian town near the French border in 2012 in protest at France's 75 per cent tax on the wealthy. He also took Russian citizenship the following year.