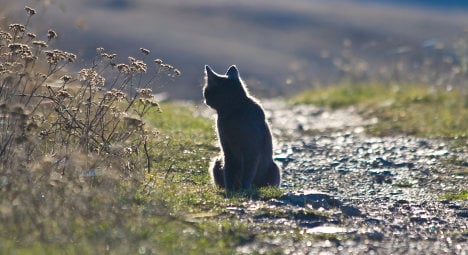 A cat (not the one in the photo) has travelled from Provence to Normandy and been reunited with its owner. Photo: Cat photo

“Cookie” disappeared in January 2013 but was finally reunited with its owner in October 2014 after somehow making it all the way from Grasse in Provence to Calvados in Normandy region, an incredible journey of 1,200 km.

“It’s unbelievable what happened,” Dan Bouchery, the owner, told The Local. “I was shocked. Shocked in a good way, of course, but I couldn’t believe it, I cried.”

For work reasons, Bouchery had had to move to Grasse for three months in January 2013 and brought her then ten-month-old cat along with her. [To the great surprise of its owner, Cookie found its way back home. Photo: Dan Bouchery]

As Bouchery was staying in a hotel, Cookie wasn’t allowed to roam around outside like it was used to.

To make its stay a bit less boring, the owner let it out into the closed off hotel garden a few times, but then Cookie suddenly disappeared on March 7th.

“I thought someone had stolen him,” Bouchery said.

She did everything she could to find Cookie, searching the town, putting up posters and an ad in the local newspaper “Nice-Matin” but to no avail. Eventually, she had to return home to Normandy without her pet.

Then in August, nearly one and a half years after Cookie’s disappearance, Bouchery received a phone call from a vet in Orbec, a town close to Beaumont-en-Auge where she lived, who had identified Cookie thanks to its microchip.

As it turned out, Cookie had been staying with a woman in Orbec for three months who thought the skinny, dirty and exhausted cat didn't have an owner. When she took Cookie to the vet to have it checked for flees the vet realised the cat belonged to Bouchery and told the woman she would have to return it.

“She wanted to keep Cookie,” Bouchery said. “I would have lodged a complaint if she hadn’t returned him.”

After talking to the police the woman agreed to return Cookie to its rightful owner, and Bouchery and Cookie were finally reunited on October 14th.

So how did the cat manage to make it all the way across France?

“I don’t know of course but I think Cookie did it on foot,” Bouchery said. “I think cats are a bit like carrier pigeons, they seem to be able to navigate and find their way.”