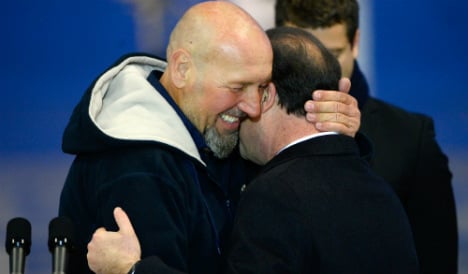 "There was no time, there were no bearings. I was no longer a human being, I don't know what I was," Lazarevic, sporting a goatee and shaven head, told television station France 2 of his ordeal.

Kidnapped in northern Mali in November 2011, Lazarevic was released last Wednesday in exchange for what Bamako confirmed was the release of four prisoners from Al-Qaeda in the Islamic Maghreb (AQIM). France has refused to confirm this.

The towering Frenchman of Serbian origin, who lost 35kg (77 pounds) while in captivity, detailed his harrowing experience, saying he never lost hope.

He was moved roughly every two weeks for three years, sleeping outside in the sand or on rocky ground, with barely any communication with his jailers.

With no radio or television, his only contact with the outside world was three letters from his daughter Diane.

Initially he was held with another, sickly, hostage, Philippe Verdon, who he thought had been released. However Lazarevic found out last week that Verdon had in fact been found shot dead in July 2013.

"In the beginning, in the first two or three days, I told Philippe: 'If we want to escape it must be now because we still have our strength'

"So I pretended to get a bit lost by going a bit far while going to the toilet to try and get my bearings. But I very quickly understood there was too much security, we wouldn't get far and there was no point trying."

He said he spent around 100 days tied up at one point, his hands behind his back and his ankles bound together, with only a flimsy blanket to protect him from the chilly night.

For about a year-and-a-half he tallied the days as they went by, and then he stopped.

"We were beaten, tortured. Very often. They hit us with metallic cables. I remember they were particularly tough one December 31 and January 1, as if they wanted to celebrate the new year in their own way."

Lazarevic maintained he was not a mercenary, an allegation reported in some media that led his jailers to accuse him of being a spy or soldier, and which he believes was the reason for his often harsh treatment.

He described his captors as very young, one of them claiming to be only 14, and only one claiming to speak French.

"They are poor people who are given guns and money. I think I was kidnapped for a ransom, religion… I don't know. They prayed sometimes."

He would pray with them, in the hopes they would look upon him kindly.

To pass the time, Lazarevic did around four hours of exercise a day.

"I did karate movements, push-ups, used rocks as weights. Two or three times the jailers came to train with me."

One of the hardest things to withstand was when his jailers would tell him he would be freed in ten days, then a month, only for his hope to be dashed each time.

"I didn't think about anything, I was in a bubble, I went into survival mode. Time stopped when I was kidnapped and resumed when I was freed."