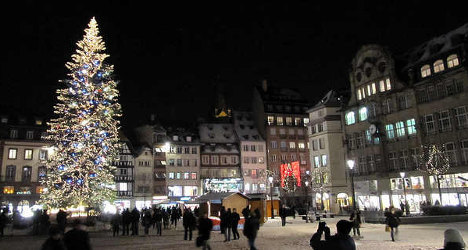 The famous Christmas market in Strasbourg came out on top in a Europe-wide ranking, published this week.

The competition was hosted by the “Best European Destination” organisation based in Brussels, focusing on promoting tourism and culture in Europe.

Nearly 72,000 people voted online in the competition, which included 15 participating locations around Europe.

“There's no doubt, Strasbourg is the capital of Christmas, and it's not only because the Christmas market is the largest and most visited one, but also because visitors and every inhabitant in Strasbourg share the spirit of Christmas," said one visitor who voted.
Another French city Lille came in fifth in the rankings.
“I have come to this Christmas market for years now and every year it's even more beautiful, it is really moving and not just for the Christmas market but also for the beauty of the city. The other shops are also very interesting," said one visitor.
Also making the top ten were the cities of Manchester in the UK (9th), Prague, (10th) and the German cities of Nuremberg (4th), Dresden (6th) and Cologne (8th).

The market city locations were evaluated based on their popularity, value for money and all-round Christmas spirit.