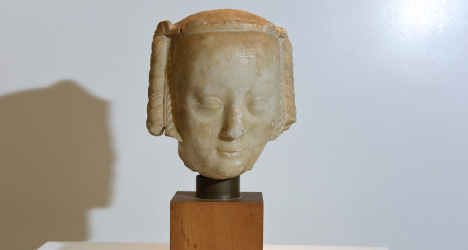 The marble head of a French queen sells at auction for over €1million. Photo: Miguel Medina/AFP

The head, believed to date from between 1370 and 1380, is decorated with intricate braids in fashion at the time and is "well preserved despite light damage to the nose and lips," according to the Piasa auction house.

The work is attributed to Flemish sculptor to the royals Jean de Liege.

The auction house said all evidence pointed "to this exceptional head originating from the tomb effigy of Jeanne de Bourbon, Queen of France."

Among the clues cited by Piasa were  the form of a crown on the sculpture and damage to the back of the head suggesting it was hacked off when the tomb was vandalised during the French Revolution.

"Only a royal effigy could have warranted such an operation."Queen Jeanne, not renowned for her beauty, died shortly after giving birth to her ninth child aged 40.

"To find ourselves in the presence of the effigy bust of Jeanne de Bourbon may seem extraordinary," said Piasa, adding that various elements from her vandalised tomb had come to light in recent years.

The auction house said the exact journey of the effigy from its removal during the revolution to its reappearance in the hands of a Belgian antiques dealer more than fifty years ago "will doubtless remain a mystery."

"It was detached, preserved, then haggled over; sold to a trafficker in royal goods; bought by an admirer of the Ancien Regime; taken across the frontier before falling into the hands of the antiques trade; and finally acquired by a Belgian engineer enamoured of beautiful objects."