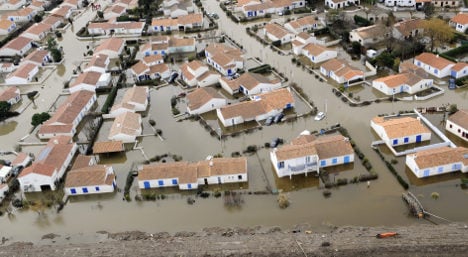 The scene of devastation after the floods hit the La Faute-sur-Mer in 2010. Photo: Bertrand Guay/AFP

The court ruled that Rene Marratier was aware of the risks of flooding in La Faute-sur-Mer on the western coast but "deliberately hid" them so as not to miss out on the "cash-cow" of property development.

A total of 29 residents, mainly elderly people and young children, drowned in bungalows when the seawall protecting La Faute-sur-Mer gave way, exposing its roughly 1,000 citizens to the fury of the stormy sea.

It was the fiercest storm to have battered France since 1999 and left more than 170,000 homes without power.

The storm also resulted in deaths in neighbouring Germany, Spain and Belgium and killed one person as far away as Portugal.

Francoise Babin, in charge of building permits for La Faute-sur-Mer, which is in the Vendee region, was sentenced to two years behind bars and fined €75,000 ($93,000).

Her son Philippe was sentenced to 18 months in jail for not ensuring that the seawall was being monitored on the night of the storm, February 27, 2010.

The prosecutor said there had been a "building frenzy" in La Faute-sur-Mer that had directly led to the deaths.

Marratier's lawyer countered that his client was being tried to "please the victims". The former mayor described himself as a "scapegoat".