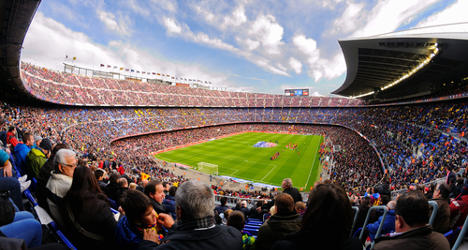 The two victims, whose injuries were not life-threatening, were taken to hospital for treatment, a police spokesman said. One of the two victims remained in hospital.

In the first attack a French football fan who had just left the Camp Nou stadium was approached by two men dressed in dark clothing and wearing ski-masks who wounded him with a knife, a police statement said.

Shortly afterwards three French youths who had also attended the match were assaulted by several people and one of them was injured by a knife and also taken to hospital, the statement added. This victim had already been discharged.

Police said they did not know the identity of the attackers and the motive for the attacks.

One of the two stabbings could have nothing to do with football and could be an attempted mugging, a police spokesman said.

The attacks come less than two weeks after a Deportivo fan was killed after being beaten and pushed into a river during clashes outside Atletico Madrid's Vicente Calderon stadium before a La Liga match between the two sides.

The Spanish government sacked the security agents of the two clubs after the death and Spain's Football Federation and the government-controlled Higher Sports Council have said tougher sanctions for clubs over violent behaviour by supporters will come into force on December 15.

Barcelona won the match 3-1 with goals by Lionel Messi, Neymar and Luis Sanchez but both sides qualified for the last 16 knockout stages of the competition.