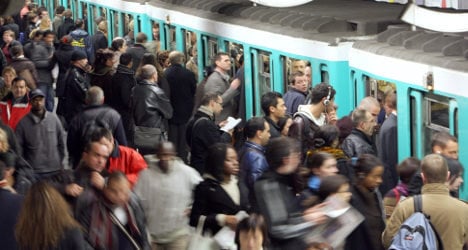 Paris commuters will only pay €70 in future no matter where they live. Photo: AFP

Up until now the cost of a monthly transport pass in Île-de-France, called the Navigo pass, depended on which zones you needed to cover (see map).

But from October next year commuters around the whole of the region, no matter what zone they are in, will pay a flat fee of just €70. In the German capital Berlin a monthly pass for zones A,B and C costs €97 and in Madrid a monthly pass including out zones (up to B3) sets commuters back €82.

For the Socialist Party the move is a measure of solidarity between wealthy Paris with the generally poorer suburbs.

“This revolution of a flat-rate pass will help create regional unity, greener travel and boost competitiveness for companies in the Paris region. It will also be a formidable tool to help redistribute spending power,” a statement said.

However questions have been asked about the government's plans to finance a measure that could set the state back €400 million each year. Although critics say the real price of the flat-rate card could be as much as €550 million.

Transport authorities say it will be partly funded by raising the amount companies pay towards their employees travel passes, which will bring in around €210 million.

But members of the UMP opposition party have slammed the new pass as a “poisoned gift” for the residents in Île-de-France.

“The truth is that the flat-rate pass of €70 will inevitably lead to higher taxes and less investment,” read an open letter published in the Huffington Post, signed by the likes of former prime minister François Fillon and former Paris mayoral candidate Nathalie Kosciusko-Morizet.

Their letter claims 15,000 jobs will be threatened because there will be no money to fund the Greater Paris project to improve transport links around the capital and that the much-needed renovations to RER lines will no longer be affordable.

Critics also claim companies will be forced to drop pay increases in order to pay for their employees' extra transport costs.

"It's a hidden tax on the spending power of employees because companies will have no choice but to sacrifice wage increases or block recruitment," the open letter continues.

"Is this really what we want given that for the first time, unemployment is rising faster in Île-de-France than elsewhere in France?" it reads.

"It's a measure designed for ten percent of those living in Île-de-France but paid for by 100 percent of them."