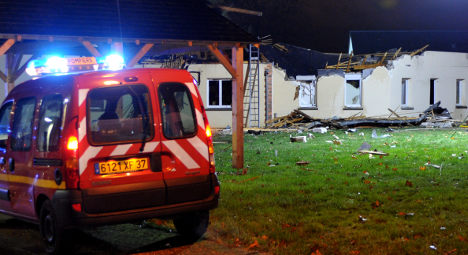 The wreckage after the jet crashed into the property in central France. Photo: Guillaume Souvant/AFP

The accident involving an Alpha Jet trainer on a night flying exercise took place in the Vouvray region, near the city of Tours in the Loire valley.

The pilot and student pilot parachuted to safety after making for "a dark area that appeared to be uninhabited," said Colonel Cyril Duvivier, commander of the airforce base from where the plane took off.

One of the injured residents of the home was said to be in serious condition in hospital.

Health Minister Marisol Touraine, who travelled to Vouvray late on Wednesday, said the 63-year-old resident who was killed had been living in the home "for several years".

She called for a full and transparent investigation into the accident.