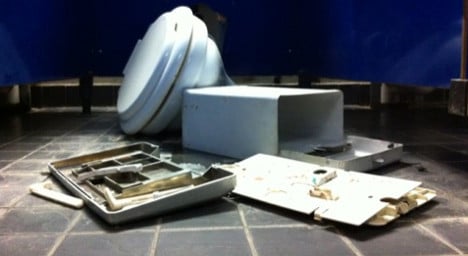 French universities are in a state of ruin and the students have photographic evidence. Photo: http://universiteenruines.tumblr.com/

The French higher education system is in crisis, according to lecturers, researchers, students and union members who will march in protest in cities across France on Thursday.

They are angry at the lack of funding being given to universities and point to the 2015 budget which will see spending cut by as much as €136 million, at a time when they say investment is vital.

“We need to highlight the catastrophic state of higher education and research in France,” read a statement from the collective “Sciences en Marche” (Sciences on the march).

The same group organised a similar day of action in October but say their demands have been ignored by the government, who they accuse of turning a blind eye to “the degradation of the conditions” under which they carry out their research.

“They are deplorable and it’s a real political problem,” said Sophie Duchesne, the director of research at CNRS (National Centre of Scientific Research).

The movement has been backed by students angry at the lack money invested in renovating student accommodation and lecture theatres.

They have been posting images of the crumbling universities on line on a Tumblr account named “Universities in Ruin”.

“Many research centres and universities are now on the brink of ruin (financially),” reads a statement on the web page.

“Many are falling apart, literally. The lack of resources has consequences for the quality of teaching and research, but also on our daily lives.

“Students reluctant to go to bathroom, 12 people forced to work in a space of 20 square metres and people forced to  study in a unheated lecture theatre, greatly complicates our studies and research missions,” the statement reads.

See their photos below:

(The university of human sciences at Aix Marseille)

(A toilet in the student residence at Grenoble University)

(A dead cockroach in the toilets of the university in Caen)

(Students crammed in at the University of Paris 8) (A gloomy corridor at Lyon 1 university looks like something out of a horror movie, say students)