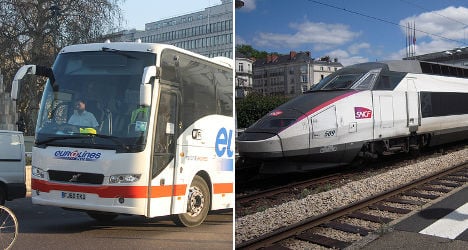 Intercity travel may be about to get a lot cheaper in France when the government finally lifts the severe restrictions on bus companies that have been in place for decades to protect the SNCF national rail company from competition.

Eurolines is one of the companies that says it plans to rapidly step in and create a network of coach lines that will let travellers go between France’s major cities for far less than they would have to pay for a train ticket.

The Socialist government’s plans to open up the intercity bus sector was one of a raft of projects announced by Economy Minister Emmanuel Macron on Wednesday aimed at energising the crisis-hit economy.

The plans have yet to pass through parliament, but if they go ahead the new bus lines could be in place by next year.

Coach travel is negligible today in France, where there is no equivalent of Britain’s National Express bus company or the Greyhound network in the United States.

A mere 110,000 people travelled by bus in France last year, compared to a whopping 30 million in the United Kingdom and eight million in Germany.

Part of the explanation for this French exception is that most parts of the country are easily accessible by extensive and efficient rail, plane and motorway networks.

But the main reason is that the regulatory framework was set up to make sure the state-run SNCF kept it dominant position, thus preventing coach operators from entering the market and creating a network.

Bus services usually only cover routes for which there is no train connection, and are sometimes run by or for the SNCF.

In recent years international bus companies have offered a limited number of intercity routes in France, but they are only allowed to do so if the bus has begun or will end its journey abroad.

But all that is about to change, if the government’s planned deregulation goes through.

Laurence Broseta, the general director of Eurolines’ parent company Transdev, has promised to create an entire network of intercity lines.

She said that the company would focus on routes that were “badly served by the SNCF” such as Bordeaux-Lyon or Rennes-Strasbourg, but it would also target the busy and highly lucrative routes such as that between Paris and Lyon.

Tickets are expected to cost around half what a traveller would have to pay for the same journey on board a train.

Boseta insisted that her firm would not be competing directly with the SNCF for customers, arguing that the two companies were targeting different segments.

France’s Competition Authority pointed out in a report  http://www.autoritedelaconcurrence.fr/doc/cp_autocars_20131113.pdf published earlier this year that freeing up the coach sector would leave French consumers with an extra 800 million euros worth of spending power.

The authority also calculated that deregulation would lead to the creation of an extra 10,000 jobs in France, where three and a half million people are currently out of work.