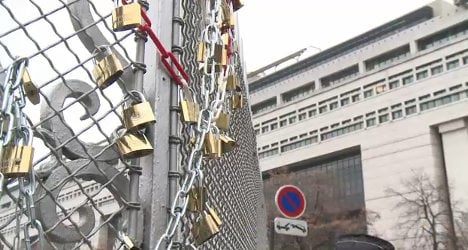 Locks are attached to the fences around France's finance ministry at Bercy in a recent demo by business owners. Photo: AFP

"This is a law which seeks to remove, in a pragmatic way, obstacles we have identified in several sectors to free up untapped potential for growth and activity," read the wording of the bill presented by Emmanuel Macron on Wednesday.

"The ambition is to give life back the French economy,” said Macron.

Macron, France's youthful banker turned economy minister, was presenting the measures under the watchful eye of the European Union and Germany, which has recently chided its neighbour for not doing enough to revamp its economy.

The bill, aimed at loosening rigid labor laws and fueling competition in a vast range of sectors, has caused controversy and lead to impromptu protests by notaries and bailiffs in Paris.

We've out pulled ten of the most important proposals from the bill:

This is the flagship reform in Macron’s bill and the one that has caused the most controversy. Under the proposed law shops will be allowed to open 12 Sundays a year instead of the five that they are allowed to open on currently. Although they’ll need authorization from the local mayor first.

In return stores must compensate employees by paying them more to work on the traditional rest day. The rules on pay will also apply to the 600 special tourist zones around the country, where shops are currently allowed to open on Sundays. The government also wants to set up “international tourist zones” where working on Sunday and evenings will be possible all year round.

Macron wants to open up traditionally closed-shop sectors of the economy, such as for bailiffs and notaries, thousands of whom hit the streets in an unusual white-collar protest. They aim to do this by negotiating lower tariffs for “everyday” acts such as buying property. A new fee schedule will also be in place by next year. They will also be more transparent and regularly reviewed.

The bill also seeks to open up inter-city coach travel within France in order to boost competition in the transport sector, which is dominated by rail travel and personal cars.

Another move is regulating motorway franchises to limit increasing toll rates. The new Regulatory Authority of Rail and Road Activities (ARAFER) shall be given “extended” powers to control the motorway sector enabling it to introduce more competition and also advise on the national bus routes.

5. Reducing time and cost in acquiring a driver’s license:

When an increase in cash capital appears to be the only way to keep a business afloat, people may be forced to sell their shares of a company if doing so would save the business and retain jobs. According to the Council of State (Conseil d'Etat), this rule would only apply to businesses with more than 150 employees.

The new bill would enable start-ups to issue business creator share warrants to all their employees including those from their subsidiaries. This measure should also help smaller companies attract managers even when they can’t afford a generous salary.

Labour court proceedings are to be made easier and faster by shortening deadlines and favouring professional judges.

The bill also wants to encourage the development of intermediary rental housing by allowing local authorities to build on a bigger area of land.

This might be approved of in Brussels and Berlin but maybe not in France. The government plans to sell off between €5 and €10 billion ($12 billion) in state-owned assets.