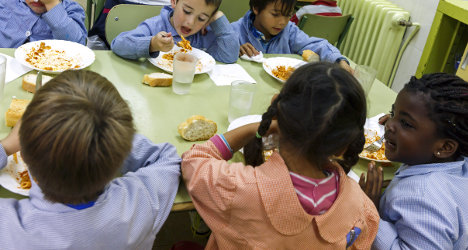 'Pork or nothing' for Muslim pupils at a school in Sarthe, north-western France. Photo: AFP

Another week in France and another row has broken out surrounding secularism or laïcité as it’s is called.

After town halls were told to remove nativity scenes because they were against the principle of “laicïté” one mayor in the south of France has used the same argument to justify “a pork or nothing” policy in his school.

From January 1st pupils in the little town of Sargé-lès-Le Mans in the Sarthe department of north-western France will not be offered a substitute meal if they don’t eat pork.

This will affect the 15 Muslim pupils in the school who cannot eat pork because it against the dietary rules of their religion. Eating pork is also against the rules of the Jewish religion but it is not believed there are any Jewish pupils at the school.

Mayor Marcel Mortreau says his decision is based on the “principle of Republican neutrality”.

“The mayor is not required to provide meals that respond to religious requirements. This is the principle of secularism,” Mortreau told Europe1 radio.

The Town Hall has also backed its decision on the grounds of logistics claiming its new school meals provider has complained about the extra workload that comes with providing alternative meals when pork is on the menu.

The mayor bowed to their complaints even though providing a second meal costs no extra money, according to France Bleu radio.

Muslim parents and pupils have reacted angrily to Mortreau’s decision.

“Eating two starters is not the same as eating a meat dish. Meat is something the body needs to work and to think. I need meat, it’s important,” one pupil named Tarik told Europe1 radio.

His mother Yasmine was also upset.

“Telling a small child that ‘you will eat less today because there’s pork on the menu’ is difficult to comprehend. You feel it is discrimination.

“You hear comments like, ‘if you don’t like it, take your children home’. It hurts,” she said.

It’s not the first time the issue of having substitute meals for Muslim and Jewish pupils has been at the centre of controversy in France.

“We will accept no religious requirements in the school lunch menus,” Le Pen told RTL radio. “There is no reason for religion to enter into the public sphere.”

In March 2013 the school in the village of Arveyres in the Gironde region of south-west France stopped offering an alternative meal for children who did not eat pork, which is forbidden under Jewish and Muslim dietary laws.

Around 30 of the 180 children had up until then been offered a substitute meat when pork was on the menu, France's TF1 television reported.

Parents of some of those pupils affected took umbrage to the decision.