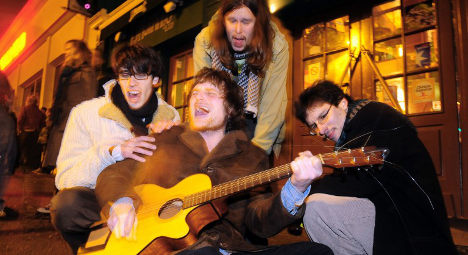 If you’re planning to call in the New Year in Orleans bear in mind there’ll be cops keeping a close eye on how much you’ve had to drink. Photo: Fred Tanneu/AFP

If you’re planning to call in the New Year in the French city of Orleans, 110 kilometres from Paris, bear in mind there’ll be cops keeping a close eye on how much you’ve had to drink.

“Every year an average of 250 to 300 drunken people are apprehended by police,” local authorities told French radio station Europe1.

“It can take one or two patrol cars between two and four hours to mobilize the drunkard from start to finish.”

The cost of deploying Orleans’s police and emergency services as well as the general time-wasting which comes with it has spurred the town hall to implement “tariffs” for partygoers found to be too drunk on the night of the 31st of December.

Together with the local branch of emergency service SOS Medecins and regional public security authorities, Orleans Town Hall has set the fine at €120 to cover the transport costs of an ambulance and police vehicles.

Though the French have long been known for their moderate – but steady – consumption of alcohol, the Anglo culture of binge drinking – where large amounts of alcohol are consumed in a short period of time – is now common among young people.

French authorities have being trying to tackle the issue by introducing prison sentences and hefty fines for those inciting to “drink until drunk”.

"We have to put a stop to drunkenness that does such damage to young people," said the country's Health Minister Marisol Touraine.

"Directly provoking a minor to excessive consumption of alcohol will be punished by a year imprisonment and a fine of €15,000," the text of her law said.

The draft legislation aimed also to prevent "inciting people to drink on the Internet", in an apparent reference to the global craze "Neknomination", a game which left several people dead after accepting challenged to down drinks.