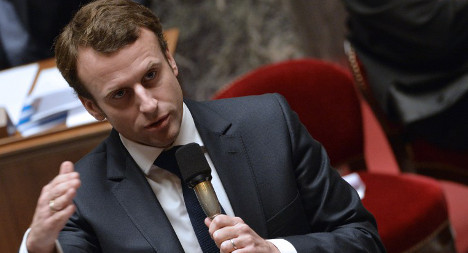 France Wednesday unveiled a controversial package of reforms to energise its crisis-hit economy, including a plan to expand Sunday trading for shops that has sparked outrage in some quarters.

The proposed measures also included a plan to open up traditionally closed-shop sectors of the economy, such as for bailiffs and notaries, who plan to hit the streets in an unusual white-collar protest.

"This is not a law about the protected professions or about working on Sundays," the proposed legislation states. "This is a law which seeks to remove, in a pragmatic way, obstacles we have identified in several sectors to free up untapped potential for growth and activity."

Emmanuel Macron, France's youthful banker turned economy minister, was presenting the measures under the watchful eye of the European Union and Germany, which has recently chided its neighbour for not doing enough to revamp its economy.

Other moves include opening up inter-city coach travel within France, and selling between five and 10 billion euros ($12 billion) in state-owned assets.

But it is the proposal to extend Sunday shopping that has touched off a firestorm of criticism, even among fellow members of the ruling Socialists.

Retail outlets may currently apply to local authorities to open on five Sundays per year, but Macron wants to expand that to 12.

Shops situated in "international tourist zones" would also be allowed to open until midnight and on Sundays year-round.

"Do we want millions and millions of tourists — notably Chinese — who come to the capital to leave us and go and do their shopping in London on a Sunday?" said Prime Minister Manuel Valls in a recent interview.

However, the left wing of the Socialist Party (PS) has said it will vote against the measures after a parliamentary debate expected in January, believing it "casts doubt over all the historical battles of the (political) left".

In a PS memorandum sent to the economy minister and obtained by AFP, deputies said it was "not necessary to move beyond five Sundays per year across the whole nation".

"Everyone has to accept that we have to change things that aren't working, things that drag down the economy and therefore jobs, even if that shakes up habits, vested interests or corporatism," Valls told reporters.

'Devil in the detail'

The French economy is badly in need of a fillip. Growth was a sluggish 0.3 percent in the third quarter, after two consecutive periods of zero growth.

Unemployment is stuck at a record high 10.4 percent and President Francois Hollande has vowed not to stand for re-election if he fails to reverse the trend.

Meanwhile, France, Europe's second-largest economy, has found itself in hot water in Brussels and Berlin for its public deficit, which is expected to be above the three percent ceiling until 2017.

German Chancellor Angela Merkel took a pot-shot at Paris over the weekend, saying French reforms were "insufficient", and Brussels has slammed the "limited progress" made by Paris.

"There is no doubt that the French economy suffers from a lack of competition in domestic markets and some of the measures proposed by the government would help to tackle this issue," said Diego Iscaro, France analyst at IHS Global.

"However, the devil is in the detail," he told AFP, adding that there was "a relatively high risk of the bill being significantly diluted during the parliamentary process."

Even if the reforms were approved and implemented in full, Iscaro said there were doubts over whether they would have a significant impact over the short term, "although they should help to lift the economy's long-term growth potential".