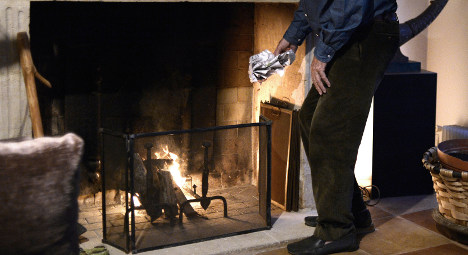 WIll open fires be banned in Paris after all? Photo: AFP

The ban on log fires in and around Paris is to be brought in in order to try to clean up Paris’s dirty air, which made global headlines earlier this year.

For the Socialist-run Paris Town Hall the measure was to show it could flex its green muscles with the burning of wood to heat homes seen as a contributing fact to the pollution in the French capital.

Paris suffers from regular spikes in air pollution. In March, the problem got so bad that authorities banned half of all cars from the streets and made public transport free for several days.

But the decision has sparked anger among residents and chimney sweeps.

Now the Socialist government’s Ecology Minister Ségolène Royal threw a spanner in the works on Tuesday when she described the ban as “ridiculous” and said she would overturn it.

“They made us believe it was more polluting than diesel,” Royal said.

The Ile-de-France region, which includes the French capital and seven other districts, had issued an order stating that residents will no longer be allowed to use their fireplaces from January 1 to fight air pollution.

A further 435 towns and cities will be banned from using open fireplaces, although they will still be allowed to burn wood in clean, closed-combustion chimney places.

But Airparif, which monitors air quality in and around Paris, has said that 39 percent of fine particle emissions come from cars and only four percent from wood burning.

"You have to be a little reasonable. I am not in favour of a society of prohibitions," Royal said.

Paris Mayor Anne Hidalgo, who won the race to be the city’s leader in May this year, thanks in part to a deal with the Green Party is yet to respond.

But it’s likely she won’t take kindly to Royal meddling in her city’s business.