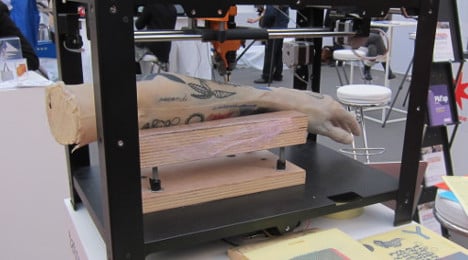 An automatic tattoo machine. Is this what the world needs? Photo: Simone Flückiger

The exhibition “ExpOsons la France, tous visionnaires” was held at the Grand Palais bin Paris and brought together companies from all over France.

The idea was to showcase the innovation and creativity in France and was opened by the country's Foreign Minister Laurent Fabius.

“It was our first opportunity to present our product to the public,” one of the exhibitors, David Lissmyr told The Local.

Along with his team, he came up with a gadget that connects to mobile phones and measures the concentration of pollution in the area. The device saves all the information, informs users about pollution peaks and offers tips on how to improve respiration.

Many of the gadgets and products at the exhibition revolve around the environment and how to improve it.

There was “Canibal”  – a digital recycling machine for cans, bottles, and carton giving people an incentive to recycle outside of their homes. Throw in a bottle and you may win a ticket for a discount at participating boutiques or restaurants.

The machines are already in place in the Paris train stations St. Lazare and Montparnasse.

While some exhibitors showed the latest advancements in the world of robotics other inventions were solely aimed at entertainment.

A design company put an interactive spin on the traditional table football game, equipping the table with sensors and LED lights to show players the score and a video replay of the game.

“It’s the first evolution of table football in 50 years,” the creator Michaël Imbert said. “We didn’t want to change anything about the game to not put anybody off but just make it more fun and interactive.”

To see 15 of the best inventions up close click on the link below.

The top 15 new inventions to come out of France