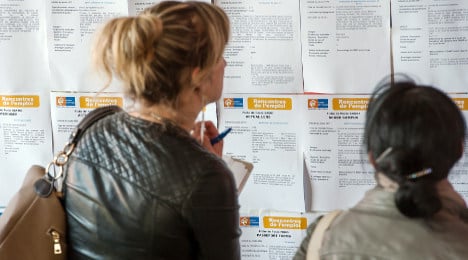 Getting your hands on a permanent job in France is increasingly like hitting gold. Photo: Philippe Huguen/AFP

Short-term job contracts dominated the French labour market last year, representing more than eight out of ten new hires, cementing the notion that landing a permanent job in France is like finding the pot of gold at the end of the rainbow.

The figures, released by the Labour Ministry’s statistics office Dares, showed that short-term CDDs (Contrat à Durée Déterminée) represented 83.6 percent of all new hires in 2013, up 2.3 percentage points from 2012.

But by the second quarter this year, the situation had got even worse. Dares said that by then, the number of temporary hires had climbed to a staggering 84.2 percent – a new historic high.

The agency said the trend was hitting all age categories, but that the number of permanent positions handed out had seen a particularly strong decline among those aged between 15 and 49.

The agency also said the duration of short-term contracts are continuing to shrink, with about half of them lasting ten days or less in 2013, compared with 14 days or less the year before. Around a quarter of them didn’t last longer than two days, it said.

President François Hollande has said he will not stand for re-election in 2017 unless he manages to cut the unemployment rate.

His presidency seems to hinge on the so-called "responsibility pact" which will cut payroll taxes for employers by €40 billion in return for companies boosting recruitment. He has pledged to create half a million jobs by 2017.