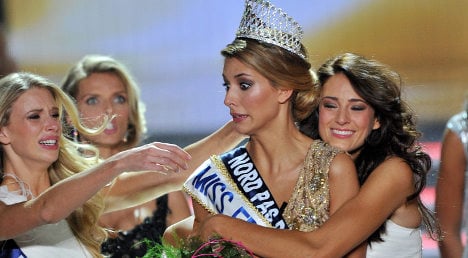 Camille Serf is hugged after the Miss Nord-Pas-de-Calais was elected the beauty queen of France. Photo:AFP

Camille Cerf (photo) was crowned Miss France 2015 on Saturday night in front of 8.5 million TV viewers. That meant 300,000 more French people tuned in to see an emotional Cerf come out on top than the previous year when Flora Coqueral was the beauty queen of France.

The result dominated the headlines in France, with breaking news alerts being seen sent out by all major media sites.

Within hours profiles of Camille Serf were being published by sites across the web.

For the last few weeks the French media has been abuzz with news surrounding the competition that brought together 33 young women from different regions of France, and not just the gossip mags.

The mainstream broadsheet publications were caught up in the frenzy with even Le Figaro publishing an article last week titled: 'Miss France: The unsuspected secrets of the 33 candidates'.

Most news sites have produced a photo gallery of the contestants (as have we, CLICK HERE) to allow them to see who is representing their region.

So why is it that so many French people are drawn to a beauty contest that objectifies women in a country where "égalité" is supposed to be one of its fundamental principles?

There is the fact that it's essentially reality TV, a format that always seems to guarantee a certain amount of success these days, but one argument is that many in France can simply relate to the young women taking part.

"The reflect a desire for social revenge shared by many French people.

Jost says the competition is the antithesis of feminism, yet it must appeal to many.

“They have a short interview but are basically asked to be beautiful and quiet. It’s anything but feminist but it’s popular,” she says adding that the fact it takes place at Christmas probably adds to it's success.

Michel Le Parmentier who organized the Mini Miss contests for teenage girls, which were recently banned in France, rejects the idea the competitions are sexist.

"Beauty pageants are a way of giving someone back the confidence they may have lost,” Le Parmentier said.

“There’s no chauvinism behind the competitions, there are even feminist groups that organize pageants,” he said.

Le Parmentier said that competitions need to be made more modern and the organizers of this year’s Miss France contest seem to have taken a step in that direction.

For the first time ever in a competition that dates back to 1920, they have introduced a general knowledge quiz where contestants had to prove they’re familiar with subjects like politics, literature, and history.

"Miss France is a reflection of the French people. She will be invited to a lot of television shows and it would not serve us well if we elected someone who does not at least know what's going on around her," said Sylvie Tellier, former contestant and now director general of Miss France.

The move seems to be an attempt by organizers of Miss France to disprove accusations that contestants might have all the beauty but no brains.

The winner of Miss Round France Solange Marais had a simple explanation for the pull of the pageant.

"People just like to see pretty girls walking around the stage and wearing bikinis," Marais told The Local. "It's always been that way," she added.

She probably has a point. Watching a selection of the country's most attractive young women prance around on stage in fancy dresses and bathing suits will undoubtedly be attractive to some, but there's got to be more than that, hasn't there?

Muriel Trueba, president of Comité Miss France, an annual non-televised beauty pageant, told The Local that part of the attraction of Miss France was that the competition stirred feelings of regional pride, that run deep in the country.

“The French are very attached to traditions and especially to their regions,” said Trueba. “The competition is mostly for entertainment, but people want to support the girl competing for their region and want to see her win.”

Virginie Spies, a lecturer at the University of Avignon says the fact the entrants must adhere to a code i.e. not posing nude for any photo shoot, means the competition is “showcases a respectable France” which holds true to its values”.

“Clearly that’s a reassuring concept in a time of economic and social uncertainty,” she told L'Express magazine.

The longevity of Miss France is in contrast to the story of beauty pageants in other countries which were either ditched after TV ratings plummeted or after they were slammed for being sexist and outdated.

There have been some recent controversies that have dogged the competition, such as when a black community rights group accused it of being "too white". There was also the time one of the contestants had to give up her chance when it emerged she had posed nude for a photo shoot.

But the competition goes from strength to strength. 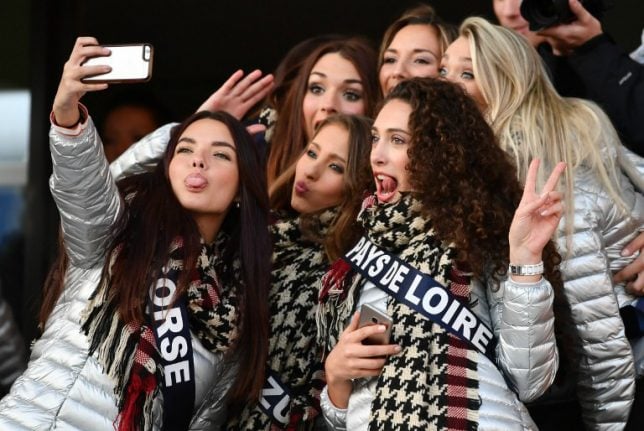