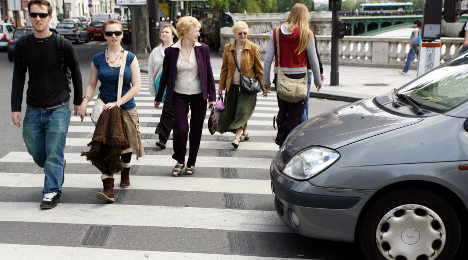 Imagine the centre of Paris without any cars. It may happen. Photo: AFP

"In the four central districts, apart from bikes, buses and taxis, the only vehicles allowed will be residents' cars, delivery vehicles and emergency vehicles," Anne Hidalgo said in an interview with the Journal du Dimanche weekly.

Hidalgo said the proposed anti-pollution scheme would start at weekends but could be "quickly" rolled out for the rest of the week.

"I want diesel cars out of Paris by 2020 and if possible beyond the peripherique," said the mayor, referring to the constantly choked ring road around the capital.

Central Paris has a relatively high population density in European terms and tourists are often surprised by the traffic levels in and around the historic sights of the world's most visited city.

The city also experiences periodic pollution spikes forcing authorities to impose temporary speed limits on motorists and even to ban vehicles from running on certain days.

Hidalgo said she wanted to limit the traffic on some of the most polluted streets — like the iconic but traffic clogged Champs-Elysees — to "clean vehicles".

As an "experimental" measure, she suggested allowing only ultra-low emitting cars on these major thoroughfares.

She also intends to extend zones where the speed limit is fixed at 30 kilometres (18 miles) an hour so that it becomes "the norm in Paris".

"Driving at 50 kilometres per hour on the main arterial roads would become the exception," she said.

And in a bid to get people out of cars and on to bikes, the mayor said the amount of cycle lanes would be doubled by 2020 as part of a 100-million-euro bike development plan.

She said she also wanted to roll out a system of electric-powered bikes along the same lines as the city's popular velib temporary bike hire network.

The plan will be discussed in the town hall on February 9.

Top city transport official Christophe Najdovski said last month that there would be restrictions on the most polluting cars in central Paris from the middle of 2015.

During the last spike in pollution, in December 2013, the air quality was so bad, it was equivalent to heavy passive smoking, according to an expert report.

At that time, Paris authorities ordered half the cars off the road and introduced free public transport.