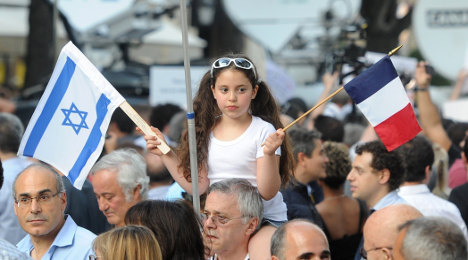 French Jews protest in support of Israel after anti-Semitic attacks on synagogues during pro-Palestine protests this summer. Photo: AFP

Speaking at a rally in the Paris suburb of Creteil, where the attack took place on Monday, Bernard Cazeneuve said: "We need to make the fight against racism and anti-Semitism a national cause by getting all bodies concerned involved.

"The Republic will defend you with all its force because, without you, it would no longer be the Republic," he added.

Cazeneuve said anti-Semitic acts and threats have more than doubled in the past 10 months and called for the authorities to ensure that "none of them goes unpunished".

In what President Francois Hollande has described as an "unbearable" attack, assailants stormed the flat of a young couple, raping the woman and stealing jewellery and bank cards.

According to the male victim, the attackers told them they had not chosen the place at random.

"We know that your brother is the manager of a big clothing chain. We know he has the cash till," one of them said, according to the man, who was interviewed on French television.

"In any case, you Jews, you have money," the assailant added, according to the victim.

This was not petty crime but a "cowardly, vile and anti-Semitic act," said the minister. "Behind this crime, this is an evil that is eating away at the Republic and which needs to be fought at all costs."

Speaking later on French television, Prime Minister Manuel Valls said he was "surprised" there were not more demonstrations on the streets against anti-Semitism and racism.

"What happened in Creteil, this abominable crime, this violence, the rape of a young woman, (the attack on) a family because they are Jewish. That's not France," stressed Valls.

France is home to some 500,000-600,000 Jews, the third largest Jewish population in the world, after Israel and the United States.

Tensions over the recent Gaza conflict spilled out into the streets in July with looters destroying Jewish businesses and shouting anti-Israeli slogans.

The number of French Jews who have moved to Israel in the first 10 months of 2014 has more than doubled compared to last year, a leading Jewish agency said last week, attributing the spike to a sluggish economy and a rise in anti-Semitic sentiment.

"It's true. We're thinking of leaving," said Sarah Landau, who has lived in Creteil for nine years.

"France today is not like the France I used to know. My Judaism was never a problem but today it's a problem for our children."