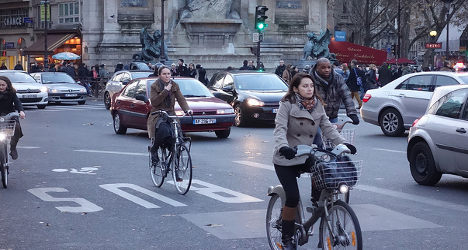 Cyclists in France who go through red lights or cross pavements or ride the wrong way down a street better watch out.

Rules of the road in France apply to cyclists just as they do to motorists but those on bikes rarely have to pay a fine for their misdemeanors.

The National Council for Road Safety (CNSR) is set to change all that by lowering the amount cyclists have to pay for fines but vowing to hand them out them more frequently.

The new rules would cover nine different cycling violations – including cycling the wrong direction up one-way streets, jumping red lights and stop signs, using mobile phones when on the bike and refusing to give way to pedestrians on a crossing.

After 147 cyclists were killed in road accidents last year, reflecting a six percent rise in the mortality rate among cyclists, CNSR recommended “to extend the principle of lower fines adapted to cyclists to urban zones” at the National Assembly on Monday.

Acknowledging that it is "often difficult for law enforcement to monitor spreading deviant behaviour” and wanting “to promote a more systematic application of sanctions” the CNSR experts also suggested an “awareness campaign to encourage better respect of the rules”.

The move comes after the new measure has been tested in the eastern city of Strasbourg and proved a success.

In the capital of Alsace, cyclists are faced with a fine of €48 for riding in the wrong direction instead of €90 in the rest of France.

Since 2012 some 833 fines were issued and within a year accidents involving cyclists have gone down by 37 percent.

However, other French cities still have a way to go.

In Paris, the number of cyclists on the road has gone up by around 400 percent in recent years and in the first seven months of 2014 some 450 cyclists were injured in bike accidents, corresponding to a rise of 9 percent compared to the same period the year before.

At the end of September the Parisian police department conducted yet another campaign to make cyclists aware of the dangers of the road.

In France cyclists are not obliged by law to wear a helmet but the CNSR does recommend it.