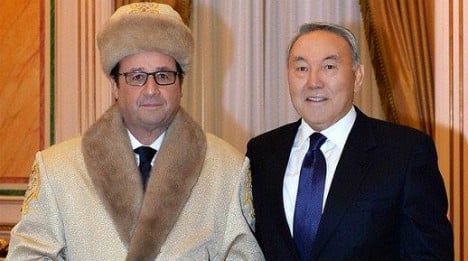 The photo was taken by the official photographer for Kazakh President Nursultan Nazarbayev during a meeting between the two in Astana on Friday, French radio reported.

It was posted online on the Kazakh press service's Instagram account before being removed on Saturday morning — enough time to allow for it to spread on the Internet.

French media reported that the Elysee, as the French presidential palace is known, was angered by the photo.

"A real hit for Christmas: the #Hollande doll that children can dress as they want," one media commentator Christian Delporte said.

Asked about the "Hollande bashing", French Prime Minister Manuel Valls pointed out that the president was engaged in important work, including his meeting on Saturday with his Russian counterpart Vladimir Putin.

"From the outside, France is viewed sometimes with envy, and in any case with respect," Valls said. "Everyone must realise that the president of the republic leads a great country and that great country, and its head of state also, must be respected by all."

Other defenders of Hollande posted pictures of various leaders also wearing traditional garb during foreign visits, including of former president Jacques Chirac when he visited the Territory of Wallis and Futuna Islands in 1986. See below.