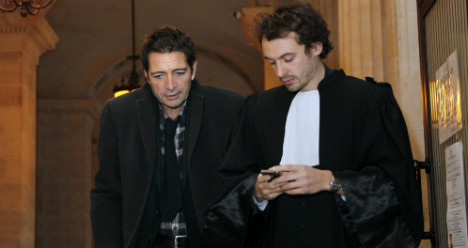 British businessman Ian Griffin arrives at the Paris' Criminal court with his lawyer to a hearing of his trial for the murder of his partner Kinga Wolf in 2009, on December 5, 2014. AFP Photo/Matthieu

The jury found 45-year-old Griffin guilty despite his claim that he had no recall of the incident because he had blacked out in their room at the exclusive Le Bristol hotel near the Champs Elysees in May 2009.

Her skull, jaw and larynx were smashed and more than 100 marks were found on her body, from her face to her feet.

Giving its verdict, the court rejected the defence's arguments, saying Griffin was responsible for his actions and pointed to his "attempts to delay the discovery of the body", and to his contradictory account of the events as proof of his guilt.

Griffin made no reaction as the verdict was read out, but his new girlfriend Tracy Baker — with whom he had a baby while he was on bail — collapsed in tears in the public gallery.

The prosecution described Griffin as a "gigolo", who had no visible source of income but lived off his wealthy girlfriends, such as Wolf, who owned an international company that supplied tomatoes to supermarkets.

It said he had a history of violence towards women and called for a 25-year prison sentence.

The Briton had claimed he and Wolf had had a ferocious row over dinner at a chic restaurant in the French capital after she refused him the anti-depression pills to which he had become addicted.

He said she then pressured him for sex, but he was in no state and refused.

"She was very upset," Griffin told the court in evidence on Tuesday.

He said he had left the restaurant before her intending to "get my car keys and leave", but she made it back to their hotel room before him.

"When I walked into the room and heard her voice, I went into a total blank, nothing," Griffin told the court.

"I know it doesn't make sense, but that's what absolutely happened."

Griffin said he had woken the next morning to find the room in an "awful" state and tried to clear up the mess.

He claimed he had not found his girlfriend's body, between two mattresses, until the afternoon.

Presiding judge Didier Safar had expressed surprise at his evidence, asking why it took so long for him to think of his girlfriend.

Griffin was arrested in England in June 2009 and extradited to France in May 2011. He was later released due to a neurological condition that means he uses crutches, and had to wear a security tag.