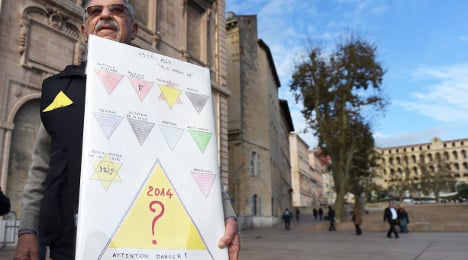 Demonstrators protest over the introduction of an ID card scheme for the homeless in Marseille. Photo: Anne-Christine Poujoulat/AFP

Authorities in Marseille were blasted for its plan to issue its homeless with ID cards featuring yellow triangles that detail their health issues.

Although the initiative was aimed at making it easier for health workers to know what they were dealing with in emergency situations, human rights groups and government ministers were equally outraged, comparing the cards to the Nazi-era yellow Star of David that was sewn onto Jewish people’s clothes during the Holocaust.

And the uproar put an end to the scheme on Friday when authorities in Marseille confirmed that they were scrapping the plan.

“It’s finished. There won’t be any more cards,” the head of the social and medical emergency services SAMU Sociale René Giancarli told The Local.

“We never meant to cause any harm or trigger a controversy, but it happened,” he said, adding the cards had been stopped on the orders of the city’s mayor Jean-Claude Gaudin.

Giancarli also said he could understand the criticism the initiative had gotten.

“We just wanted good to come out of this, but I made a mistake. I admit that and I can accept when I’m wrong.”

The card, which was supposed to be worn visibly, identified the person with his or her photo, name and date of birth.

It also specified whether the person had any illnesses or allergies. The front of the card was adorned with a yellow triangle.

Several activist groups, including French human rights group La Ligue des droits de l’Homme, said they were troubled by the resemblance “of this card and the yellow star that the Jews had to wear during World War II.”

It also got its fair amount of bashing by President François Hollande’s government in Paris.

Social Affairs Minister Marisol was quoted in French daily Le Parisien on Thursday as saying she was shocked to hear about the initiative and that she wanted Marseille to scrap the IDs with immediate effect.

“Forcing homeless people to carry a yellow triangle indicating the illnesses they might have is outrageous. You don’t point the finger at the poorest.”

“You don’t write their illnesses on their clothes. Medical confidentiality, in particular, is a fundamental right. I want this local initiative to be stopped,” she said.

On Wednesday, about 100 activists and homeless people also protested against the initiative outside the city’s town hall.

Although Marseille’s Town Hall initially tried to defend the distribution of the cards, saying the purpose was to help health workers quickly come to the aid of a homeless person who has fallen ill or is in need of aid, it finally buckled under the pressure that they were too stigmatising.

Over 100 of the ID cards had been distributed before the plan was scrapped.