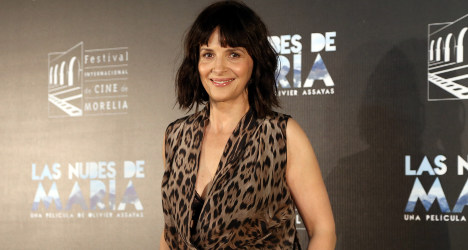 "The power of our films is the variety of the films we have in France," said Binoche, who picked up an Academy Award for Best Supporting Actress for her 1996 turn as a World War II nurse in The English Patient.

"While it doesn't work always as a commercial industry compared to America… the creative side is very alive and that's why a lot of directors from different countries can come to France to shoot films," the veteran French actress told reporters in Singapore.

"The content of the film, through the script, the talent of the director, and the actors attached, it counts a lot," she added.

"There is always a way to put films together (in France) even though you have a very low budget."

Binoche, 50, is in the Southeast Asian city-state as part of the Singapore International Film Festival.

"Clouds of Sils Maria", directed by France's Olivier Assayas and in which Binoche stars with Kristen Stewart, is being screened at the festival.

They hole up in a chalet in the Swiss Alps so Maria can prepare for a new theatre role which has strong parallels to her own life and career, leading to a fateful confrontation between the two women.

It was one of the contenders for this year's top prize at the Cannes Film Festival, which was eventually handed to the Turkish film Winter Sleep.

Binoche said Stewart, the megastar of the Twilight films, surprised her with her ability to perform with little rehearsal.

"I could really feel it was not her cup of tea. She doesn't like rehearsing, it isn't her method," said Binoche.

"She would read the lines in the morning, and she would know it. I am not like that. The prolific stage and screen actress said she had no intentions of slowing down even as age catches up with her.

Binoche returns to the London stage next March, taking a starring role in a new adaptation of the Greek tragedy Antigone at the Barbican centre.

Her character, Antigone, the daughter of mythical Greek king Oedipus, is 18 years old in the play, the mother-of-two said.

"I don't feel time when I work… actors have to forget themselves when they are in front of the camera," Binoche said.

"It's not about them, it's about what they have to give beyond themselves, what's invisible." 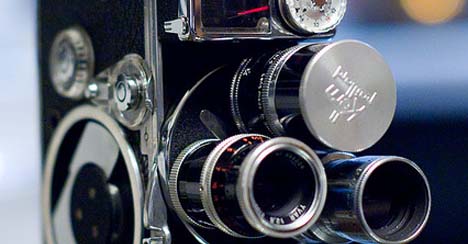 "I had always said I'd love to make our own films here in France," Besson told an opening ceremony under the glass and steel vaults of the 1930s plant, a giant turbine brightly painted by local street artists towering in its centre.

"Whereas Americans say 'Yes We Can', here in France our motto tends to be 'Dream On!'. Pessimism is something of a national sport."

"So I thank you from the bottom of my heart for believing in this dream," the 53-year-old director and producer told the gathering of French politicians, film executives and project partners.

The €170 million "Cite du Cinema", a project 12 years in the making, aims to plug a gap in the French production landscape, as a studio able to see a movie project through from A to Z, just next to the world's most filmed city.

"France has Europe's biggest film industry and yet until now it was the only European country without the infrastructure to produce a film," said Christophe Lambert, general director of Besson's production firm EuropaCorp.

Back in 1997, Besson had to spend 18 months in Britain to shoot his sci-fi blockbuster "The Fifth Element".

"I went with a heavy heart," recalled the director.

So in 2000, the filmmaker set out to create a studio complex that would make it possible to create a film in France from A to Z.

For the site he chose an Art Deco-style former thermal power plant in Saint Denis, a working class north Paris suburb, which he had used to shoot scenes from two hitman dramas, the 1990 "Nikita" and the 1994 "The Professional".

Besson started filming there again this summer for his new movie "Malavita" a Mafia drama starring Robert De Niro and Michelle Pfeiffer, who were expected for a private inauguration dinner Friday night with the likes of Jean Dujardin.

And for everybody else, the site is being thrown open Saturday for a one-off tour of what is being dubbed "Hollywood on Seine".

At the opening, Besson recalled how as a teenager, he would slip unnoticed into the old studios at Boulogne near Paris, and how later he was blown away by a visit to Universal Studios in California.

"I have always loved film studios," he said. "A film set is like the operating theatre for a surgeon, or the kitchen for a chef."

The Cite du Cinema also hosts the Louis Lumiere National film school, as well as a second film school, created by Besson to offer screenwriting and directing courses, free of charge, to some 60 youths with no prior qualifications.

"The students will rub shoulders with Hollywood stars at the cafeteria," joked Lambert.

Besson's production firm EuropaCorp purchased the site in 2006, but the project nearly ground to a halt the following year for lack of funds.

The full financing came together in 2008, with Nef-Lumiere, owned by France's Caisse des Depots and the Vinci conglomerate, acquiring the office complex, and a conglomerate of investors including EuropaCorp financing the studio complex.

The Cite du Cinema aims to rival British studios like Pinewood or Shepperton, as well as rising competition from lower-cost eastern European locations like Bulgaria. Its backers argue that its proximity to Paris more than compensates for its lack of a backlot, or outdoor shooting area.

It aims to capture big budget French projects, two thirds of which were shot outside the country in the first semester of 2012, as well as foreign films.

"This is good news for the profession," commented Franck Priot, deputy head of the French film commission, FilmFrance, whose job it is to attract foreign film shoots to the country.

EuropaCorp says it is fielding quote requests from top French and US producers and predicts the studio will be fully booked within a year.

According to one estimate, it needs to attract two major productions per year to cover its operating costs.