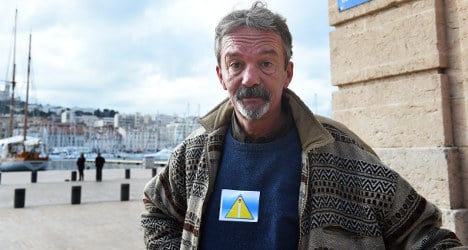 Arnaud, a homeless man, wears the controversial symbol adorning the "carte de secours" during a demonstration in front of the City Hall of Marseille, southern France. Photo: AFP/Anne-Christine Poujoul

This story has been updated. See below.

Authorities in France’s second-largest city have come under fire for issuing its homeless with ID cards that detail their health issues.

Human rights groups and government ministers have slammed the “yellow triangle cards”, comparing them to the Nazi-era Star of David that was sewn onto Jewish people’s clothes during the Holocaust.

“Wearing something that shows the whole world what illnesses you have is not only discriminating but it also breaches all medical confidentiality,” he said, adding that the symbolism in the design of the card is outrageous.

“Being identified by either a star or a triangle is horrific,” he said.

French human rights group La Ligue des droits de l’Homme said it was troubled by the resemblance “of this card and the yellow star that the Jews had to wear during World War II.” President François Hollande’s government in Paris has also reacted sharply to the initiative.

“I’m shocked. Forcing homeless people to carry a yellow triangle indicating the illnesses they might have is outrageous. You don’t point the finger at the poorest,” Social Affairs Minister Marisol told French daily Le Parisien in an interview published Thursday.

“You don’t write their illnesses on their clothes. Medical confidentiality, in particular, is a fundamental right. I want this local initiative to be stopped,” she said.

The card, an initiative Marseille's Town Hall and social services, identifies the person with his or her photo, name and date of birth.

It also specifies whether the person has any illnesses or allergies. The front of the card is adorned with a yellow triangle.

In their defence authorities say the purpose is to help health workers quickly come to the aid of a homeless person who has fallen ill or is in need of aid.

Over 100 of the identifications have been distributed already.

On Wednesday, about 100 activists and homeless people protested against the initiative outside the city’s town hall.

For its part Marseille Town Hall has been outraged by the criticism it has endured by issuing “the card that saves lives”.

In a statement given to The Local, one of Marseille’s deputy mayors Xavier Mery said: “I’m appalled by the absurd controversy surrounding this help card distributed by the SAMU (social medical emergency services).

"[The reaction] not only questions the necessity of a scheme for homeless people but also the commitment of the city, the SAMU and volunteers to come to the aid of those who need it the most”.

Mery rejected the idea that the cards need to be worn visibly and say they "allow above all firefighters and care workers to get access to essential information in order to identify, give efficient help and often to save the lives of people lacking a social safety net.”