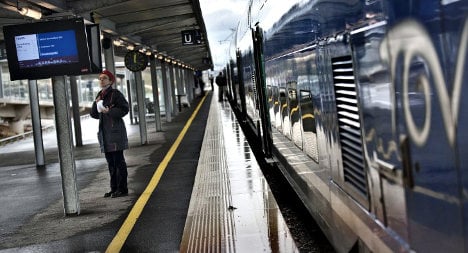 SNCF has however announced TGV traffic will be relatively normal on most lines. Photo: Jeff Pachoud/AFP

The SUD-Rail workers union has announced that a “significant” number of ticket inspectors will go on strike from 7 pm on Thursday until 7am on Sunday.

The strike comes as a response to reforms seeking to replace the systematic presence of inspectors on trains with targeted ticket checks by groups of several inspectors.

"Nobody is happy where it's already in place, especially on the regional lines in Île-de-France," Nathalie Bonnet, spokesperson for the SUD-Rail union, told newspaper Le Parisien.

The strike will affect commuters travelling on the TGV, Intercity, and parts of the TER (Transport Express Régional) networks as these trains aren’t allowed to depart without a ticket inspector present.

Later today the SNCF will publish more information on which trains aren't running based on the number of workers intending to join the strike.

The state-owned rail company has however announced TGV traffic will be relatively normal on most lines and in Île-de-France as a whole , although a third of TER trains are likely to be affected.

Christophe Fargallo from the SUD-Rail union expects a participation of 62.5 percent in the Normandy region and some 70 percent for TER trains departing from the Montparnasse station in Paris.

Some 50 percent of ticket inspectors have announced they will join the strike in Lyon, Dijon, Metz and Nancy and 41 percent in Tours.

According to the CGT union more than 50 percent of inspectors at the Saint-Lazare station in Paris intend to strike.

While the Unsa and CFDT unions haven’t called for a strike they each submitted an “immediate consultation request” to management to speed up the discussion surrounding the reforms.