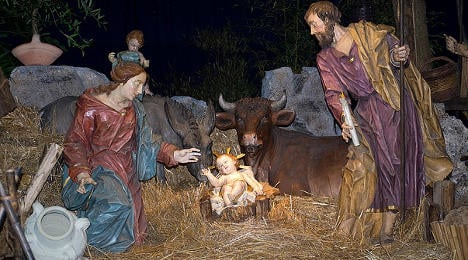 A traditional nativity scene has been banned from a French local authority building. Photo: Marco/flickr

Nantes’s administrative court ruled on Tuesday that the traditional Christmas scene of Baby Jesus in a manger surrounded by cattle and shepherds does not stand in line with France’s 1905 law on the Separation of the Churches and the State.

The court ruled this week that the traditional nativity scene or crib must be removed from the entrance to the Vendée's council building in La Roche-sur-Yon, where it has stood each Christmas for years.

"It undermined the neutrality of public service" ruled the court.

“A nativity scene is a religious symbol, representing a specific religion,” said Jean Regourd, President of the Free Thinking Association of France’s Vendée department, the organisation that had complained about the crib.

Regourd had already brought the matter to Nantes’s administrative court in 2012 after he visited the building in question in December 2010 and sent several letters to them which fell on deaf ears.

The row comes at the same as an activist group called Collectif Anonym wrecked a nativity scene in the centre of Brussels, spurring a debate in both Belgium and France over whether this Christmas tradition should be outlawed.

The story was widely covered by the French press on Wednesday and prompted news websites like Direct Matin to poll readers on whether they thought traditional nativity scenes should be banned. “Respecting secularism doesn’t mean abandoning all our traditions and cultural heritage,” argued Bruno Retailleau, President of the General Council of Vendée, adding that they would appeal the court’s decision.

“Should we also ban the Christmas stars hanging on our streets right now, under the pretext that a religious symbol will tarnish public space?”

“The Free Thinking Association isn’t free thinking, they want to get rid of all our cultural heritage," de Villiers argued.

“France is an ancient Christian land and the nativity scene is part of its roots regardless of beliefs and sensitivity. Why not ban bells?

"I reject this totalitarian secularism, it’s a form of modern terror with incalculable consequences.”

Secularism, referred to as "laïcité", is considered one of the founding principles of the French Republic, but is a matter of much debate in France, especially when it comes to education.

In 2004 France introduced a controversial law that banned the wearing of religious symbols, most notably the traditional Muslim headscarve, in schools and other state buildings. Although it doesn't refer to any one specific religion and was supported by most French people, critics saw the law as an attack on Islam under pressure from a far-right whose popularity and influence has been growing.

In response, deputies from across the political spectrum decried the ruling as an attack on secularism.

“Secularism creates a hierarchy of values, which places the common good, equal rights and respect of each person over specific cultures and traditions, whatever they may be,” Education Minister Vincent Peillon said in February 2013.

In September of the same year he unveiled a much-talked about "secularism charter" aimed at keeping religion out of schools.

One of the clauses forbids pupils from questioning teachers "in the name of their religious beliefs".