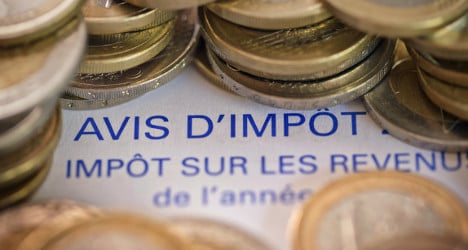 France won't be raising taxes until after 2017, the finance minister promised. Photo: AFP

Three years without any rises in taxes.

That’s what French finance minister Michel Sapin promised on Wednesday in a bid to try to restore the public’s faith in the French government.

In a press conference on Wednesday Sapin said: “The government will not propose any new measures to raise taxes, not in 2015, 2016 or 2017.

"From now on the only contributions that will rise will be linked to decisions already taken," said Sapin.

The government has been under pressure to ease the tax burden on struggling households and Sapin’s promise comes after the 2015 budget included tax cuts for millions of the worst off.

The promise, which many will doubt the government can keep, given the pressure France is under from Brussels to reduce its deficit, comes after it emerged more French households than ever were struggling to pay their tax bills.

France has seen an explosion in the number of households requesting a deferral or cancellation of part or all of their tax bill in recent years.

France has a global reputation for its high taxes. A recent study by liberal minded Brussels-based think tank the Molinari Economic Institute study found that the real tax rate for an average worker in France in 2014 stands at 57.17%, well above the EU average of 45.27%.