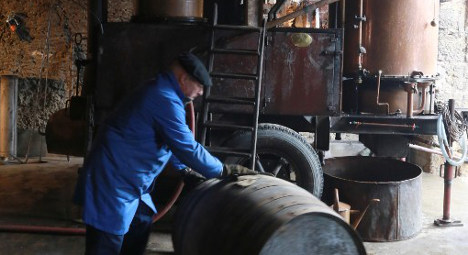 It's a scene which has been repeated for centuries in the rolling wooded hills of Gascony. Photo: Nicolas Tucat/AFP

Marc Saint-Martin has never been as busy, nor has his order book been as full.

Yet he is one of the last of a dying breed, one of only three remaining travelling distillers left in the Armagnac region of southwestern France.

From October to January, Saint-Martin — a winemaker himself — drags his 100-year-old copper still around the region on the back of his tractor, setting up his wood-fired alembic everywhere from humble barns to the keeps and courtyards of its many chateaux.

Then his team work night and day for two or three days to turn the wine from a blend of Ugni blanc, Colombard and Folle blanche (crazy white) grapes into a white spirit that is at least 53 percent alcohol.

It's as much art as science, with Saint-Martin often trusting a hand placed on the copper of the boiler as much as the thermometer.

The chemistry is simple. The wine is converted into steam, and then cooled to form the brandy.

The reality of the process is altogether more "fiddly", Saint-Martin says in his singing Gascon accent, with the heat coming from a wood fire. "You have to heat it enough, but not too much, and make sure that enough wine is going in, but not too much."

Even the weather can play a part, he says, as he stokes the fire on a damp day at the chateau of Ravignan at Perquie in the Landes department, where Armagnac has been made since the 18th century.

A fourth-generation distiller himself, Saint-Martin says Armagnac's great particularity is "it's continuous distillation".

That means wine has to come into the still non-stop, with Armagnac coming out the other side all the time as well. So it needs to be monitored all the time, 24 hours a day" by him and his beret-wearing assistant – Gascony being also one of the last fortresses of the most French of hats.

At Ravignan they keep the fire burning for two and a half days, as they distil 26,000 litres (6,860 gallons) of wine down to five thousand litres of Armagnac.

Although the clear distilled liquid is already Armagnac, it takes at least ten to 12 years of ageing before it becomes the finished product, with its deep amber colour.

By then connoisseurs claim that is more fragrant and flavoursome than Cognac, the rival brandy to the north, which is double distilled.

The really mysterious alchemy takes place during its storage in 400-litre oak barrels, where the Armagnac takes on its characteristic aromas of quince, prune, hazelnut and orange.

Part of the alcohol also evaporates as it ages (known as "the angels' share"), and more complex flavours also appear with oxidation.

At Ravignan the barrels are made from oak cut from the chateau's own estates.

In the end, however, it is all about patience.

"You can sell Armagnac after only three years but we keep it for ten to 12 years in our oak barrels," said winemaker Anne-Laurence Boubee de Gramont, whose aristocratic family own the estate. "Unlike a wine Armagnac does not develop in the bottle, but will keep the taste, colour and aroma it had on the day it was bottled."

The very oldest Armagnac at the chateau is only ever bottled when buyers turn up to collect it, so it can age right up to the last minute.

They may have an aristocratic clientele these days, but once upon a time artisanal distillers or "bouilleurs de cru" had a whiff of sulphur about them. In the grim post-war years, working class Paris was awash with cheap spirits, prompting a short-lived prohibition-style campaign against illegal distilling, mostly of apple and pear brandy in the northern regions of Normandy and Brittany.

Appalled by workers starting their day with a "bonne goutte" of strong liquor in cafes, then prime minister Pierre Mendes France radically tightened the rules and urged the French to drink milk rather than wine with their meals.

An outcry ensued and Mendes France was bundled from power the following year, with many claiming it was downright unpatriotic not to imbibe.

Now the threat to the travelling distillers does not come from interfering politicians or customs officers, but from the very success of luxury spirits like Armagnac.

And the prestige of making their own Armagnac is prompting many winemakers to try their hand at distilling.

Which is why, despite being kept more than busy by his 60 clients, Saint-Martin is one of the last of his kind.

The hours may be long but his dying profession is not without its consolations.

Most of all the "moments of great conviviality" sitting around the fire on nippy nights enjoying local specialities like grilled chesnuts and pigeon, washed down with – what else? – but the finest Armagnac.