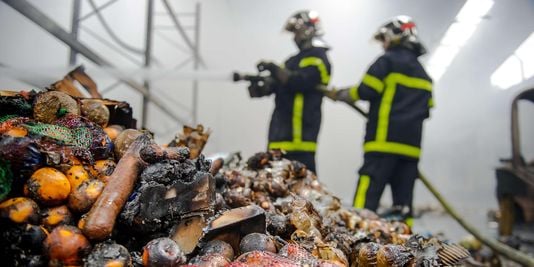 Local authorities are currently investigating what could have caused the fire after it took four hours and 45 fire-fighters to put out the flames. Photo: Philippe Huguen/AFP

The fire broke out at one of Resto du Coeurs’s warehouses in the northern French commune of Vendil-le-Vieil , in the Nord-Pas-de-Calais region.

“I’m shocked, the people who have been most hurt by the incident are those we help, the needy,” Restos du Coeur’s regional manager Claudine Decrois told BFMTV.

Local authorities are currently investigating what could have caused the fire that took four hours and 45 fire-fighters to put out the flames.

A French supermarket has already offered up €1,000 ($1234) worth of food products to Restos du Coeurs to help soften the blow of their loss.

The charity has launched an immediate public appeal to try to make up for the lost stock.

Translating to Restaurants from the Heart, this leading French food charity managed to offer the country’s homeless and needy a million free meals over the course of the last winter.

Another Restos du Coeur distribution centre was ravaged by fire in November 2012 in Mondeville, western France.

If you want to donate visit restosducoeur.org