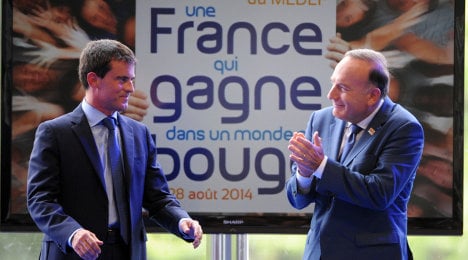 As relations sour, France – no stranger to strike action from workers – was earlier this week treated to the unusual sight of business owners taking to the streets to protest at taxes and red tape they say are driving their companies into the ground.

With growth at a virtual standstill and unemployment at record highs, President Francois Hollande is pinning his hopes of an economic turnaround on his so-called "Responsibility Pact" between government and business.

This is the deal: the government offered businesses some €40 billion ($49 billion) in tax breaks and other sweeteners, in exchange for creating 500,000 jobs before 2017 — when the next presidential election is due to take place.

But this week, politicians have taken business leaders to task for not living up to their part of the bargain.

Economy Minister Emmanuel Macron took a pot shot at the head of the powerful MEDEF employers' federation, Pierre Gattaz, saying that very few sectors of the economy had signed pledges to keep their end of the bargain.

"Today, there are very few agreements that have been signed. That's a failure and today, that's also his failure," he charged, referring to the influential Gattaz.

This sparked a furious response from Thibault Lanxade, a MEDEF board member.

"This is an extremely 'politician-like' statement, which is incoherent and incomprehensible for business leaders," Lanxade told French radio.

Gattaz himself said he had "had enough of these promises that are not being kept by this government, which continues to raise taxes while talking of cuts
of 40 billion euros."

Meanwhile, Prime Minister Manuel Valls, who sparked fury on the left flank of his Socialist Party by professing his love for business, has denounced what
he called a "provocation" by certain "irresponsible" business leaders.

Stephane Garelli, an expert in world competitiveness at the Swiss University of Lausanne, said the relationship between government and business in France was "so conflictual that you have the feeling it's very hard to get them working together."

He said that certain employers might be playing for time in the knowledge that Hollande's extremely unpopular Socialist government is unlikely to win the 2017 election and there may be a better deal to be struck with a centre-right replacement.

"I think this is a pity because I don't think France can afford to lose two years, but I have the impression that some people are tempted to play it that way," said Garelli.

On Wednesday, Macron confirmed that the pact was "at the heart of our economic policy. It has to be a success and now we need the sectoral agreements to kick off."

He said he was "confident and optimistic" that various branches would sign up to job-creating deals by the end of the year.

But as politicians scrambled to smooth ruffled feathers, business leaders showed little sign of backing down.

More demonstrations were planned on Wednesday, following protests that drew thousands in Paris and the southern city of Toulouse on Monday.

Company bosses are also fuming at a new measure due to begin next year giving employees who work in difficult conditions such as night shifts the option to accumulate points and eventually train for another job, work fewer hours for the same salary, or retire early.

Gattaz estimated Monday that businesses will have been hit by 42 billion euros in tax increases between 2010 and 2015.

"We're being asphyxiated by these taxes," he said.