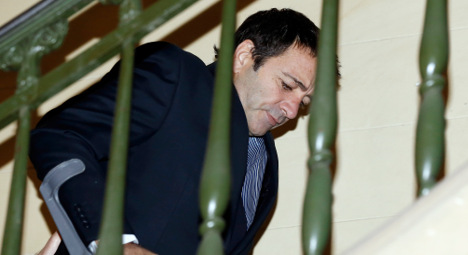 Briton Ian Griffin arrives in court. He is accused of murdering his girlfriend in the Bristol Hotel in Paris. Photo: Thomas Samson/AFP

Griffin, 45, told the court he had blacked out after fighting with his wealthy Polish-born girlfriend in a swanky Paris restaurant after she pressured him for sex.

"I know it doesn't make sense, but that's what absolutely happened," said Griffin, speaking in a quiet and hesitant voice.

On the fateful night in May 2009, the couple went for dinner near the Champs Elysees, where Kinga Wolf denied him the anti-depression pills to which he had become addicted.

Then Wolf, 36, told him: "You owe me sex" but he was in no state and refused. "She was very upset," Griffin told the court.

He left the restaurant before her and went back to the five-star hotel they shared, intending, in his words to "get my car keys and leave."

He was then shocked to find she had got back before him. "When I walked into the room and heard her voice, I went in to a total blank, nothing."

During this black-out, Kinga Wolf died of massive internal bleeding, her skull, jaw and larynx smashed, with more than 100 marks on her body.

"I woke up the next day, the room was awful. I spent hours cleaning, I put everything in the bin, I tried to clean as much as possible," Griffin told the court, his eyes tightly shut.

"The TV was broken, everything was broken… I found her in the afternoon between the mattresses," he added.

This testimony sparked surprise from presiding judge Didier Safar, who asked why it took so long for him to think of his girlfriend, who owned an international company that supplied supermarkets with tomatoes.

"I didn't even think (of her). It had happened so many times before," said the accused, who claimed he had had to barricade himself in his house "30 or 40 times" because of his girlfriend's violence.

Maybe this time was different, said Safar, noting that witnesses had described a grisly scene with "blood everywhere", on the walls, on the carpet and on the bed.

"I didn't understand she was dead, dead. If I had thought for a second a doctor could help her, I would have called… I knew something terrible had happened," said the 45-year-old.

I've only ever told the truth. I know you don't accept polygraphs in France, but I've passed four… it's the absolute God's truth, I have absolutely no memory," he said.

Griffin, who ran tanning salons and gadget shops in northwest England before going bankrupt in 2006, faces 30 years behind bars if convicted of the murder when the verdict is delivered on Friday.