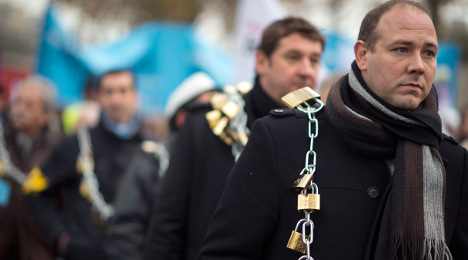 Business owners in France march with locks around their necks to symbolize how restrained they are by taxes, laws and bureaucracy. Photo: Martin Bureau/ AFP

On Monday the gates around the ministry of finance in Paris were adorned with thousands of padlocks.

It was a symbolic message sent to the government by thousands of business owners who took to the streets of Paris and Toulouse to protest against the burdensome bureaucracy, crippling payroll taxes and laws that are preventing them from creating jobs and wealth.

One of those shouting “Enough is Enough” as he marched on the ministry was Jean-François Roubaud, the president of the CGPME union that organized Monday’s protest.

He joined 6,000 others to send the message “liberate our businesses” to the government.

Roubaud explained to The Local exactly why they had had enough.

Roubaud: I can’t go through all the reasons why we are so unhappy as it would take hours but here are three of the main ones that prompted our protest on Monday.

The complexity of the bureaucracy that we face in France means it is impossible for many companies to observe the laws.

The labour code now stretches to 3,500 pages and there are 7,000 standards (normes) that small businesses have to adhere to. It’s just not possible. Margins have never been so thin. Business owners just can’t take it anymore.

For example from January 1st we are required to implement the “compte de pénibilité”, which will require companies to measure the hardship or stresses faced by each employer at work, such as the chances of them getting a bad back etc. to see whether they can retire earlier.

It will just be impossible. It’s totally unrealistic for smaller businesses. They just won’t be able to put it in place and will end up having to pay fines.

Another point is that since July 1st it is illegal to employ someone for under 24 hours per week. But what about the shop owners who need someone to fill in on a Saturday? They are not going to employ them for eight hours and pay them for 24 hours work.

There are four million part-time workers in France working less than 24 hours a week, but under this law we will put another one million people out of work. It’s absurd.

Finally there is a law that obliges owners of companies with more than 250 employees to inform the workers two months in advance if they plan to sell the company. But when we sell a company it has to be done in the utmost discretion. If we told workers then they would leave straight away and the sale could always collapse. We don’t sell a company in two months, it takes two years.

We are also asphyxiated by the amount of payroll taxes we have to pay.

The president announced his plan to lower these charges on January 1st this year as part of the Responsibility Pact. We applaud that move. But it’s now a year on and they haven’t taken effect and won’t until next year.

We can’t wait anymore. All business owners see are the €35 billion extra levies that have been placed on them over the last three years. They just see more and more taxes being imposed on them and they are finding it more and more difficult to get to the end of the month.

We know France has a good welfare state system, probably the best, but the financing of it is too dependent on payroll taxes paid by companies, which make up about two thirds of the funding.

It needs to be financed in a more balanced way so we can take the pressure off companies.

Earlier this year the French PM said he loves business. I believe him when he said that but we need more proof. The French prime minister understands our problems. We also have an economy minister who understands as well as a labour minister. But they all have their hands tied by the system put in place by their predecessors. They are in prison. Plus the government has a weak majority so it’s hard to get any reforms through parliament.

I don't care about left or right. I represent businesses and I want whoever is in charge of France to look after businesses and set them free. We are the only ones who can create wealth and jobs. The only ones.