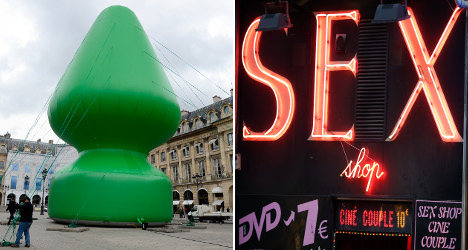 There's been a spike in butt plug sales after the exhibition of the "Tree" artwork. Photo: Bertrand Guay, Kenzo Tribouillard/AFP

Parisians are reportedly rushing to buy butt plugs in the wake of a controversy over an inflatable tree artwork that was attacked by vandals after it was compared to a giant sex toy.

“We used to sell around 50 a month,” Richard Fhal, a sex toy wholesaler told The Local.

“Since the controversy (in October) we’ve moved more than a thousand,” said Fhal who supplies shops around the capital as well as his own retail website and chain of three stores.

It quickly fell victim to the conservative populist backlash that has invaded French politics over the past couple of years. Within days vandals had attacked it, and it was decided to pull the plug on the project.

L’Express magazine last month published a lengthy article on the rising popularity of the plug, which helpfully included detailed instructions on how to use the devices and listed the dizzying variety of plugs available in materials ranging from glass to stainless steel to silicon.