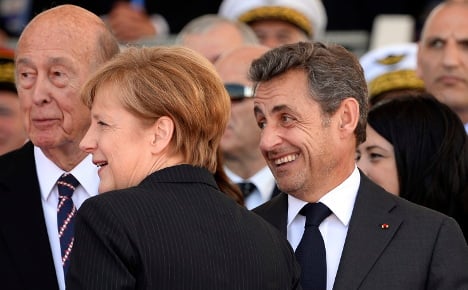 Merkel and Sarkozy meet at the 70th anniversary of the D-Day landings in June. Photo: DPA

A party spokesman confirmed to the Süddeutsche Zeitung that Sarkozy would attend the event on December 9th following his victory in a leadership election for the CDU's sister party in France, the centre-right UMP, last weekend.

The close relationship between Merkel and Sarkozy, whose abbreviation to “Merkozy” became a staple of headlines during the financial crisis as the pair struggled to save the euro, will be a key part of the Frenchman's new election bid in 2017.

Current French President François Hollande, of the Socialist Party (PS), has deep differences with Merkel on how best to return European economies to growth. Merkel and Sarkozy were so close during his 2007-2012 term that it had been planned for the Chancellor, who is widely admired in France, to take part in campaigning during the 2012 presidential election.

At the time, she said that she would support Sarkozy in the race for the presidency “no matter what he did”.

But Sarkozy withdrew the invitation for Merkel to speak after criticism that the Germans were interfering in their neighours' politics, saying that the election was “a matter for the French” – something of an unwelcome surprise for the CDU.

Now that he once again has the Elysée Palace in his sights, Sarkozy will need all the help he can get to make voters forget about the numerous scandals and legal cases in which he remains implicated, as well as his own unpopularity during his term in office.