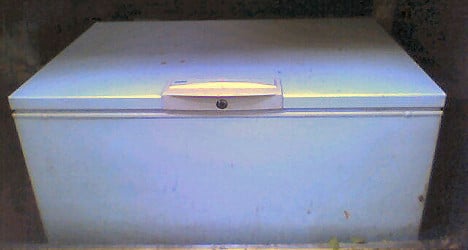 A French woman commits suicide by locking herself in her own freezer. Photo: Raymond Yee/Flickr

The woman’s body was discovered on Monday night in the freezer of her home in a village near the town of Melun, to the east of Paris.

A police source told AFP that the woman was suffering from “severe loneliness” and the most probable cause of death was suicide.

The woman’s death came to light when her daughter raised the alarm after becoming worried that “she had no longer had any news from her mother”.

Firefighters were sent to her apartment but after several searches of the house were unable to find any sign of the woman.

Eventually they checked the freezer and found her curled up body.

“She locked herself in in order to kill herself,” the source told AFP.

A search of the flat also revealed she had left five letters to various members of her family. In the correspondence she explained that she was "suffering from several diseases and from severe loneliness".

The police source said that a pathologist who visited the apartment confirmed the death was due to suicide.

France has one of the highest suicide rates in Europe that stands well above the European average.

These alarming statistics mean that the number of suicides in France is more than double that of the UK and Spain.

One expert told The Local that one of the reasons for the high suicide rate was that France lagged behind other countries when it came to mental health provision.