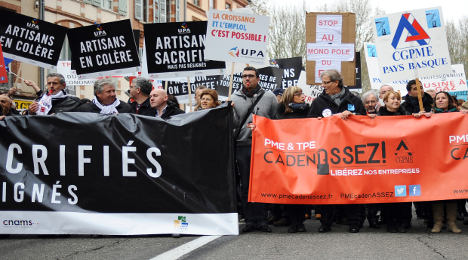 Business owners protest in Toulouse about the restraints placed on them by government policy. Photo: Remy Gabalda/AFP

Thousands of business owners took to the streets in French cities on Monday in a rare protest against hefty taxes, charges and stifling regulations they say are driving their firms into the ground.

France is no stranger to disgruntled workers rising up in anger but employers' protests are unusual, and Monday's demonstrations underlined a general feeling of stagnation or decline in the eurozone's second-biggest economy.

Organisers said 6,000 protested in Paris, 2,000 in the southwestern city of Toulouse and several hundred in Marseille in the south, blowing whistles, many wearing yellow helmets and jackets, some chained to each other in symbolic frustration.

Police however put the number at 2,200 in the French capital where protesters headed to the finance ministry, a huge, imposing building barricaded behind several rows of riot police, shouting "Free our businesses" and other slogans.

"Businesses are in danger of death," said Gerard Ramond, head of the regional branch of the CGPME that represents the bosses of small and medium-sized enterprises.

"We are not demanding money but we are asking for less regulation and payroll taxes, as well as more flexibility in employment," he said.

France is struggling to lift itself out of a years-long rut of feeble growth and increasing unemployment, while fending off persistent EU demands to reduce its budget deficit.

In October, unemployment in the country hit a new record, with official statistics showing 3.46 million people claiming jobless benefits, up 0.8 percent compared with September and 5.5 percent in comparison with the previous year.

Part of France's chronically high unemployment is blamed on red tape and onerous taxes that businesses say prevent them from taking on as many employees as they would like.

Pierre Gattaz, the influential head of France's Medef employers' union which did not take part in the protests, estimated Monday that businesses will have been hit by a 42-billion-euro ($52-billion) tax rise between 2010 and
2015.

"We are being asphyxiated by these taxes," he said.

Protesters were also complaining about a new measure due to begin next year giving employees who work in difficult conditions such as night shifts the option to accumulate points and eventually train for another job, work fewer hours for the same salary or retire early.

But critics of the protests pointed to a 40-billion-euro cut in payroll taxes promised to businesses by the government of President Francois Hollande over the next three years in return for a pledge to hire new recruits.

"This looks like a punitive strike to obtain even more," the CFE-CGC union said in a statement.

Eric Brule, the head of a regional federation representing small construction firms, said his members were merely asking for "simplification" of government rules in the sector — a demand that French leaders have promised to address.