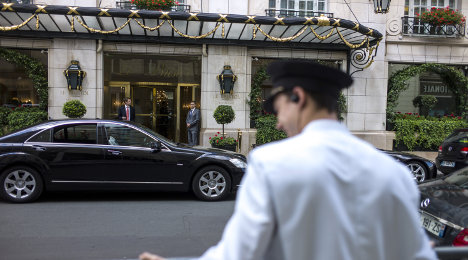 British businessman goes on trial for the 2009 murder of his girlfriend at the Hotel Bristol in Paris (above). Photo: Fred Dufour/AFP

A British businessman accused of murdering his girlfriend in a swanky Paris hotel appeared confused and evasive as his trial opened on Monday, struggling even to recall his own childhood.

Ian Griffin, 45, appeared in a Paris court dressed in a dark suit and on crutches because of a degenerative neurological disorder.

He faces up to 30 years behind bars if convicted of the 2009 murder of Kinga Wolf, a wealthy woman of Polish origin who was found dead in the bathtub of the room they shared in the five-star Bristol Hotel in Paris.

Asked about his childhood, Griffin replied in a slow and hesitant voice: "I don't really remember. I mainly swam. For 10 years it was most of my life."

Details then emerged of a troubled childhood and early adulthood.

Born into a rich family, the son of an architect, Griffin was regularly beaten by his father. A turbulent adolescence followed but then he embarked — with family support — on what would prove a successful business career.

He set up a chain of tanning centres, then made a fortune in California in the ringtone business. When this ended, Griffin came back to Britain and worked on various Internet businesses.

But the court heard that Griffin had a serious addiction problem with alcohol and anti-depressants.

Today, he said he took only painkillers for his legs.

His relationship with women was "complicated," the court heard.

"You can get many things from one person but when something is missing, you need comfort and you go to the other person to get what you need," he said, in response to a question as to whether he was seeing an old flame at the same time as Wolf.

A report into his personality revealed that he had a "need to be mothered" and a "very childish attitude to women". Experts also noted a "dependence on his parents and on women".

He said he couldn't even remember how much he was earning at the time of the alleged murder, as Wolf, a successful and wealthy businesswoman in her own right, looked after the finances.

"Kinga said to her friends, 'I don't want him to have any money of his own'," Griffin said.

The couple were in Paris en route for the Riviera where they were to try out a luxury yacht that Wolf had rented.

They became embroiled in an alcohol-fuelled spat at a chic restaurant on the night Wolf died.

A British court hearing revealed that Griffin claimed to remember nothing of this night until waking the next morning to find her lying in bed with the room trashed.

He tried to wake her and put her into a hot bath, the British court heard, then realised she was dead. He panicked, hung a "do-not-disturb" sign on the door and sped off in his Porsche.

He was extradited to France in May 2011 and stayed in custody until being released with an electronic monitoring bracelet in 2013.

A verdict in the case is expected on Friday.