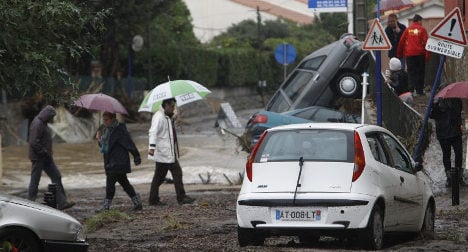 Cars overturned, streets overflowing with mud; just some of the damage done by the floods in Argeles-sur-Mer (southern France) . All photos by Raymond Roig/AFP

The latest victim was a 73-year-old man who died of heart failure in Rivesaltes, in the Pyrenees-Orientales region, when trying to force his car through a big dip in a road that was flooded.

Along the banks of the Agly river in the same region, some 2,800 people had been evacuated by late afternoon Sunday, the government office there said.

The flooding was considered already more serious than deadly overflows in 1999 and "we are evacuating residents within 200 metres (yards) of either side of the river," the government said. Another 560 people had already left their homes in Canet, Argeles-sur-Mer and Barcares, on the Mediterranean coast.

The prime minister's office dubbed the flooding "exceptional" in a statement but said "the situation is under control."

"I'm 42 and I've never seen anything like it," said Kristel Gregori, who lives in Argeles, near the Massane, a stream that often dries up but has turned into a 20-metre-wide deluge inundating dozens of parked cars.

"When neighbours woke us up at three o'clock, there was already a metre of water in the garage," she added. "The water level has subsided since but the rain hasn't stopped.

The river Berre had also flooded, reaching a metre above the level seen in flooding in 1999 that left 35 people dead and one missing in the region. About 250 people fled Sigean, located in low-lying land and lagoons just south of Narbonne.

Southern France has been hit by weeks of storms and flooding.

VIDEO: This video from BFM TV really shows the devastation caused by the floods.