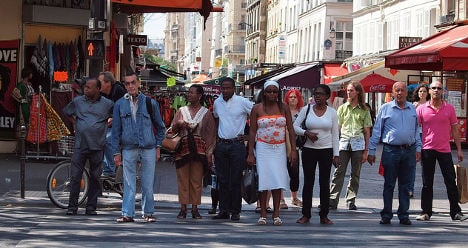 Almost a tenth of France’s population are immigrants. Photo: Zoetnet/Flickr

A new global report was released on Monday, which revealed the countries migrants are heading to and in what kind of numbers.

The report from the economic think-tank OECD in Paris was released days after France’s own national statistics agency INSEE published its own figures on immigration in France.

The Local takes a look at ten of the most significant stats to give a picture of immigration in France.

1. Almost a tenth of France’s population are immigrants: 8.8 percent to be exact. From 2004 to 2012 an average of 200,000 migrants arrived on French shores every year. Take into account those who left or died and the figure stands at around 90,000 new immigrants every year.

2. Nearly half of all new immigrants in France are European: Contrary to popular belief, Africans do not represent the biggest new immigrant group in France. According to France’s national statistics body INSEE, in 2012 they made up 30 percent of new arrivals from abroad whereas Europeans accounted for 46 percent.

3. More Portuguese than any other nationality: Eight percent of France’s migrant population in 2012 was born in Portugal, more so than people from former French colonies Morocco and Algeria (seven percent each). Brits and Spaniards (five percent each) as well as Italians and Germans (four percent each) made up the largest migrant groups on French soil.

4. Immigration from Europe started rising sharply in 2009: Crisis-hit Europeans started arriving in droves in France in 2009. Going from 88,820 new arrivals in 2009 to 105,830 in 2012, migration from other European countries has seen a much more pronounced increase than from any other continent.

5. China is the main country of origin for foreign students: Although the number of foreign students who were granted residence in 2012 dropped by ten percent, a total of 10,100 Chinese nationals completed their studies in French institutions, more than a sixth of the total. They were followed by Moroccans (6,000) and Americans (3,800).

SEE ALSO: 'No study ever showed migration was not beneficial for France'

6. France is the world’s fourth most popular destination country: "After the United States, Germany is now the OECD's second most important destination country,” the Paris-based think tank reported. Trailing behind is the UK in third place and then France in fourth.

7. More people than ever expelled: There were a total of 23,000 expulsions from French soil in 2012, a nine percent rise compared to the previous year. Up to 4,300 of these cases were however through voluntary return assistance. A reduction in the final contribution provided in such cases led to a drop in the number of immigrants who chose to leave in 2013.

8. One in four asylum seekers got residency: In 2012 41,000 adults applied for asylum alongside 14,000 minors. A total of 14,000 (including minors) of these were granted residency. The biggest asylum seeker groups hailed from the Democratic Republic of Congo, Russia, Sri Lanka, Serbia and Montenegro, and China. 9. More families reunited: 163,000 new non-EEA immigrants arrived on French shores in 2012 to stay thanks to a seven percent increase in admissions for family reunification. Most of these third-country nationals granted permanent residence were North African: Moroccan (20,200 people), Algerian (25,000) and Tunisian (12,000).

10. More migrants arriving, fewer becoming French: According to INSEE, France’s immigrant population is rising at an average of 1.6 percent per year. But that doesn’t translate to more foreigners being granted French citizenship. In 2012, naturalizations declined to 96,000 cases, 16 percent fewer than in 2011. The OECD puts the drop down to stricter requirements for language examinations among other eligibility conditions.