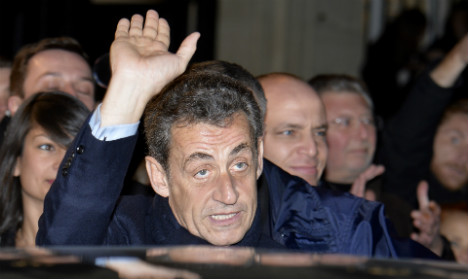 Nicolas Sarkozy cheers his fans as he leaves the UMP's headquarters in Paris on November 29, 2014 after winning the leadership of the party. Photo: Miguel Medina/AFP

Sarkozy came first in the party election with a less-than-desired 64.5 percent, placing him at the head of the deeply-split party which is hoping to turn its back on bitter leadership tussles and financial scandals.

The 59-year-old has vowed to reunite the Union for a Popular Movement (UMP), the political heir to the party founded by Charles de Gaulle after World War II, from a position seen as a key springboard back into office.

"This election marks a new beginning for our political family. We must be united and devote ourselves to finding new solutions for France," Sarkozy wrote on Facebook shortly after results were announced.

However, political commentators described his score as disappointing for someone hoping to topple the deeply unpopular Socialist President Francois Hollande in 2017 elections.

Despite his much-heralded return to politics in September, Sarkozy's comeback was largely seen as having fallen flat, with a tangle of legal woes continuing to dog him.

Nevertheless the energetic and deeply divisive ex-leader criss-crossed France to drum up support for his candidacy all the while slamming the "mediocrity" of Hollande's government.

Record unemployment, an economy in the doldrums and a string of scandals have seen Hollande's approval rating sink to new lows.

"Staying in the background when everything is going so badly would be cowardice, the opposite of my idea of political commitment," Sarkozy told a political meeting on the eve of the party vote.

He has yet to state it, but there is little doubt about Sarkozy's endgame: to win back the keys to the Elysee palace which he lost in a humiliating poll defeat to Hollande in 2012.

Unpopular at the time of his poll defeat and derided as the "bling-bling" president for his flashy style, Sarkozy is hoping to capitalise on the fact that Hollande is now even more disliked by French voters than he was.

Andrew Knapp, an expert in French politics at Britain's University of Reading said Sarkozy's bid for the presidency was "partly an act of revenge for a defeat which he has never fully accepted".

His victory at the head of the UMP is only the first battle won.

"There are still a lot of people out there who cannot stomach the man, which is partly why (President Francois) Hollande was elected," said Knapp.

For Sarkozy's race to the presidency, the real battle of opposition titans will come at party primaries due in 2016.

Chief among these is his former colleague turned arch-foe Alain Juppe, a popular politician and one-time prime minister who served as defence and then foreign minister under Sarkozy.

But analysts say the myriad legal cases over dodgy campaign financing in which Sarkozy has always denied wrongdoing could trip him up.

"Can Sarkozy really run a presidential campaign over the next two-and a-half years while periodically receiving summonses?" asked Knapp.

"The party faithful seem to have decided that no matter what judges throw at him, Sarkozy is their darling. I don't think that is true of the wider electorate."

The far-right National Front — flying high after making gains in local and European elections this year — also held its party congress on Saturday.

The party, whose founder and former leader Jean-Marie Le Pen has been repeatedly convicted for inciting racism and Holocaust denial, welcomed a third generation of the political family into its leadership.

For Marine Le Pen, the messy state of mainstream parties is the gift that keeps on giving. A recent poll showed she would win the first round of voting in 2017 with 30 percent.

With Hollande taking a whipping in opinion polls, experts say the 2017 election could end up a race between the UMP candidate and Le Pen.