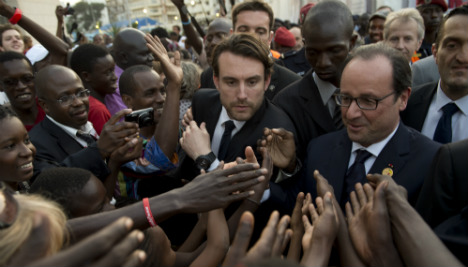 French President Francois Hollande works the crowd on November 29, 2014, in Dakar on the steps of the Francophony summit. AFP Photo/Alain Jocard

"In Nigeria, an attack that killed more than 120 people coming out of a mosque — that's what a sect like Boko Haram is capable of, that's why we still need to fight together, always fight against terrorism," Hollande said.

"We must unite against barbarism, against the risks posed by fundamentalism, notably in the Sahel, in Africa," he said at an annual gathering of French-speaking countries hosted this year by Senegal.

The president of neighbouring Cameroon, Paul Biya, also addressed the meeting, saying: "With this sort of adversary there cannot be any compromise. We are facing an organisation of global proportions."

Cameroon, Chad, Niger and Nigeria pledged to send a combined total of 2,800 troops along their shared borders on November 1, but none have yet been deployed.